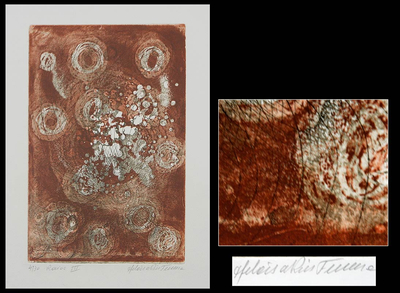 Born in Rio de Janeiro, Heloisa inherited from her father, a lawyer and syndicalist, her interest and involvement in social causes and combating injustices during Brazil's dictatorship period. From her mother she inherited a sensibility towards the arts as she watched her design, embroider and sew.

"When I was a little girl I would go with mother to the Santa Teresa neighborhood where she taught women how to embroider," recalls the Brazilian artist.

"My mother always encouraged me to be creative, so I developed original and creative embroideries. I have experienced art in many forms, including theater, corporal expression, and contemporary dance. I also played the flute and I sang in the chorus of the Associação Brasileira de Música.

"I began to teach art in Sao Paolo in 1967 and in 1970 I started working with xilogravure and metal engraving. I studied with renowned artists Edith Behring, Anna Letycia and Mario D'Oglio. In 1979-1980 I won a scholarship to go to Portugal to study at the Fundação Calouste Gulbenkian.

"I've continued teaching in different art schools, and I was a consultant to a team of architect and engineers in the creation of Tijuca's Office of Engraving, which I also coordinated and where I taught for 15 years. During that time I coordinated the publication of a three-volume book titled 'Gravura Brasileira Hoje Depoimento' (Today’s Brazilian Engraving Testimony)."
View all