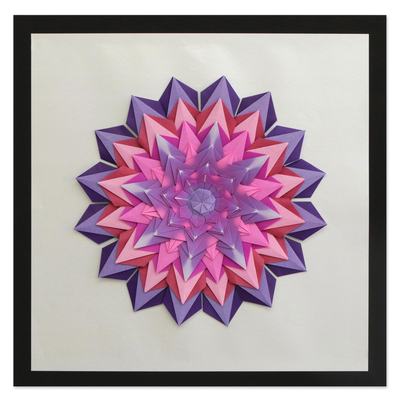 bySandra Gullino
Radiating in hues of purple, pink, and red, paper origami is folded by hand to... more

Radiating in hues of purple, pink, and red, paper origami is folded by hand to create the image of a beautiful star. Inspired by traditional mandalas, Brazilian artist Sandra Gullino creates this stunning piece. This artwork arrives on a mat board passe-partout.

You can find our paper wall art 'Passionate Mandala' by Sandra Gullino in wall decor categories such as Star Wall Art and Paper Wall Art. Enjoy exploring these sections for other Novica treasures.

"When I see a piece of paper, I like to hear what it has to say. Paper does speak to people!"

"My training is in industrial design, and I worked for years in graphic programming until I discovered the art of origami. I began to make pieces using books, which was rather difficult because the majority were in Japanese or English - languages which I don't speak. After a while I began to learn by myself, until I arrived at the moment when I abandoned my work to dedicate myself exclusively to this.

"Objects made with folded paper have various applications in both education and psychology. I like to make decorative objects from origami. My clients are architects and decorators, and my pieces compose scenes from soap operas and other television programs. Often I come across true challenges, like the campaign for the sport magazine Lance!. The art directors asked me to make soccer balls, tennis rackets, and a basketball hoop from magazine paper, pieces that I had to invent, make, and redo. The campaign won a columnist prize in the category of mass media in the year 2000.

"When I see a piece of paper, I like to hear what it has to say. Paper does speak to people! We make with it what it wants to be; the folds will be perfect. In Japanese, the word origami is composed from ori (to fold) and gami (paper), and gami has the same sound as the word for God in this language. I think this is why paper is considered a sacred object. It is a seductive material that attracts.

"I give origami workshops and I've succeeded in that although many of my students live agitated and stressed lives, they can achieve absolute concentration in the moment when they make their folds. Some have told me it is the only time in which they can truly relax. This practice teaches us patience, calm, and concentration - attitudes that we cultivate from day to day. I become very happy when I see people satisfied that they have learned to make origami; personally I am not interested in guarding the knowledge of each piece for myself, it is necessary to pass it along.

"I feel a great euphoria and pleasure when I make origami. I am very happy to be able to bring my pieces to the homes of the world through Novica. I hope that these little pieces of paper - precisely folded - bring life and joy to diverse ambiences."
View all