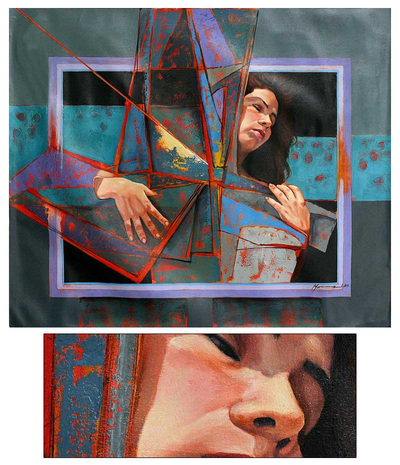 (1)
A realistic woman seems to break through the constraints of the canvas, grasping... more

A realistic woman seems to break through the constraints of the canvas, grasping abstract elements with strong hands. "I explore the strength of the human being who struggles to overcome obstacles. This is a woman who becomes a professional even though she is also a mother," says Peruvian artist Carlos Morales.

You can find our 'surreal Woman' (2009) by Carlos Morales in paintings categories such as People and Portraits Paintings, Surrealist Paintings and Oil Paintings. Enjoy exploring these sections for other Novica treasures.

"What I paint is unique and original. A lot of hard work goes into each of my paintings and I do them with a lot of love."

Peruvian artist Carlos Morales was born on December 31, 1955. From a very young age, his inclination towards the arts was extremely apparent, and in 1974 he was accepted to a center of art studies. In 1979, he was admitted to the prestigious School of Fine Arts, where he graduated in 1984. A versatile artist, Morales also took courses in tooled leather, embossed mate gourds and carpentry.

Morales defines his work as something unique to him. He is inspired by a desire to represent the immortal essence of life. He intends to transmit the experience of being human and the concomitant psychological tendencies. Morales admits his biggest challenges have been first as a father, second moving to Lima from the Andean highlands and thirdly, to be able to exhibit his work abroad, especially in the United States.

Morales prefers to paint with acrylics or oils, pencils, brushes or palette knife. To Novica clients he wishes to say "What I paint is unique and original. A lot of hard work goes into each of my paintings and I do them with a lot of love."

Morales has exhibited his work collectively and individually since 1979 in Peru as well as in Bolivia and the United States including Texas, Washington and New York. Among the awards bestowed upon Morales, the following are particularly significant to the artist:

In addition, Morales is an accomplished weaver.
View all