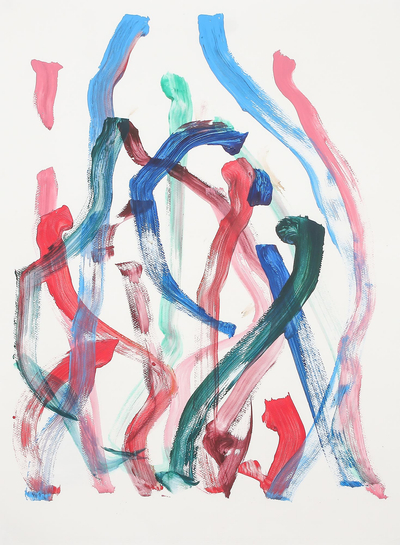 Working with pastel hues, Nua-Un the elephant from Thailand paints a vibrant... more

Working with pastel hues, Nua-Un the elephant from Thailand paints a vibrant composition. Colorful lines bend and dance over the paper in this stunning scene.

Nua-un is a close friend of Aleena, another elephant artist. When Nua-un was young, she would often sneak away from her mother to play with Aleena.

Nua-Un is a female elephant whose real name is Phang Malinee. But the mahout and officers at the Thai Elephant Conservative Center-TECC where she was born call her Nong-Nua-un, Nong is a traditional Thai title for younger women. Nua-un derives from Mae-Nua-un, which means "beloved woman."

She was born on June 12, 2004, the second child of Phang Singkhorn and Seedaw Tadaeng. Nua-un has an elder brother, Phlai Kaew, born in 2001, and a younger sister, Phang Kelang, born in 2012. Little Phang Kelang still lives with her mother; both sleep in the TECC jungle area and come back to the central courtyard early each morning. Their mom, Phang Singkhorn, has been chosen as the leader for elephant students.

Nua-un is very intelligent and also mischievous. Her mahout, Numtao, is highly respected because his father was also a mahout. He has taken care of Nua-un since she was born. People say that the elephant and its mahout will have similar habits and they do. Both are smart, friendly and joyful. Nua-un likes eating a lot, so now she weighs more than she should. In this way, she differs from Numtao, as mahouts must not be overweight. The TECC officers arranged a weight-loss course for the elephant that includes running around the center.

When Nua-un is naughty, Numtao will not let her eat grass. So she will only touch the grass because she knows he's angry with her. Then, when she is once more allowed to eat grass, she eats a lot for very long time. Nua-un sometimes takes her mahout's hat, fills her trunk with water and sprays him.

Nua-un is a close friend of Aleena, another Novica-featured elephant artist. When Nua-un was young, she would often sneak away from her mother to play with Aleena. To this day, both elephants like to snuggle with each other.

Nua-un is one of the elephant school show members on the demonstration field. She can stoop down with her forefeet, do painting exhibits, and show off her basic skills very well.