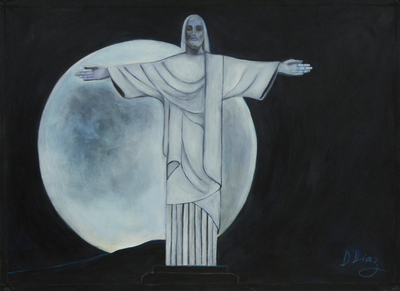 (1)
Rising above the mountains, the full moon illuminates a Rio de Janeiro icon in... more

Rising above the mountains, the full moon illuminates a Rio de Janeiro icon in pearly light. The statue of Christ the Redeemer embraces all with arms wide open. Dayse Diaz successfully conveys the magnitude of the renowned sculpture, which stands atop Corcovado hill, 709 meters above sea level.

Bigger than I realized, but found a great place for it

You can find our 'christ the Redeemer and the Moon' by Dayse Diaz in paintings categories such as Christian Paintings, Landscape Paintings, Expressionist Paintings and Acrylic Paintings. Enjoy exploring these sections for other Novica treasures.

"I am an eclectic painter. I am not attached to themes or to techniques, and I choose what I want to depict based on how I feel."

"I have been attracted to the fine arts since I was young, and I intuited that I had talent. Painting and design were my first tentative attempts and from the beginning I began to develop a figurative language of my own. A principal characteristic of my painting is the human figure.

"Since 1992, I never stopped studying in my search for perfection, either to learn a new technique or to research a determined theme. It was in the Lage Park School of Visual Arts that I began to free myself of rigid concepts and where I defined my style. Although I do not have an academic formation in the arts, I have drawn for a long time and have learned to transcend line. I also express myself through color. From this learning experience I became certain of who I am: I am an eclectic painter. I am not attached to themes or to techniques, and I choose what I want to depict based on how I feel. My works show a certain nostalgia for older times and I tend to resist being modernized. Each painting has a reference to the great masters -- I learn so much by observing their works. I find the Impressionists especially fascinating, and Romantic themes, and the mystery of W. Turner's oceans.

"Over these past years I have participated in a number of exhibits, such as the Atelier Montez y Quintella (1991), III Encontro de Artes da Barra da Tijuca (2000), "Four Women" (Citibank Arts Terrace, 2000) and "Four Styles" (Casa de Cultura Estácio de Sá, 2001). In 2002 I won an honorable mention in the VI Brasil Arte (Conde Military Museum of Linhares) and in the 33º Salão de Artes do Clube Naval. Novica offers me an opportunity to show my works to the entire world and this is very satisfying."
View all