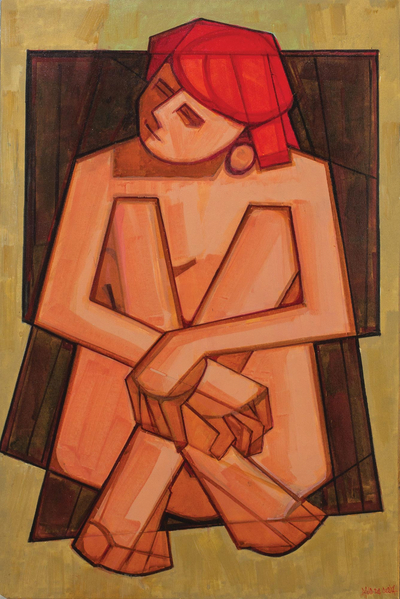 (1)
A nude is seated, her arms wrapped around her knees, her thoughts far away. The... more

A nude is seated, her arms wrapped around her knees, her thoughts far away. The sun caresses her girlish body and illuminates her short red hair. Working in cubist style, David da Costa depicts her in a sensitive portrait that conveys an understanding of the psychology of youth.

You can find our 'nude' by David da Costa in paintings categories such as Artistic Nudes Paintings, People and Portraits Paintings, Female Form Paintings, Cubist Paintings and Acrylic Paintings. Enjoy exploring these sections for other Novica treasures.

David da Costa has accomplished 90 years of amazing life and is still full of energy. He takes dance and theater classes and has even written two plays of his own! He is a true artist and has been recognized in various books in Brazil for his various artistic works.

"We give all of ourselves and our emotions to our work and sometimes there isn't enough money in the world to buy certain paintings."

David da Costa, originally from Niterói, Rio de Janeiro, is a renowned Brazilian artist who has dedicated over 50 years to his art, and over the past 18 years has displayed his works at the Art Fair of Ipanema. Da Costa graduated from the distinguished Colmeia dos Pintores do Brasil as well as from the School of Fine Arts of Rio de Janeiro. Through his many years dedicated to his art, he has captured innumerable awards, among them the Bronze Medal at the National Exposition of Fine Art.

"I began my artistic career in 1948, with professor Levino Frânzeres, an academic by excellence. I frequented the Fine Arts Institute with some of Brazil's famous contemporary artists. I used to be an academic artist and then became a modern artist when I studied with Iberê Camargo, one of Brazil's most noted artists of the 20th century.

"I would define my work as simplification of forms and geometry, though nowadays I acknowledge Impressionist elements in my paintings. I depict a most varied assortment, from seascapes to regional Brazilian peoples.

"I'm from a time when an artist entered the market through a vernissage, a French word referring to the day when an artist's work received its final varnish coating – that day would be one of celebration, with food and drink for the specialized art critics, the press and interested buyers. Nowadays the vernissage custom is dying out, especially because of the cost involved in such a feat. There was the marchand who represented the artist – it was a very close relationship between the artist and his public. Nowadays the relationship is much colder, however this is compensated with a more democratic space to sell our works. Whereas before a spectacular show would sustain the artist and make his work stand out, today the work has to speak for itself. The person that triumphs is the person with the best work and the most popular. Today the public is the true judge of the work.

"It is through the Internet that these new relationships are being established. A fine artist has to paint for the people and can't afford to work just for the elite. The public still prefers traditional art, and academic art is what still sells the most throughout the world, perhaps because inherent to it is the truth of our civilization. The world owes much to science and progress but the ethical and aesthetic fundamentals are to be found in Greece and Rome.

"As artists, we paint for pleasure, not for money. We give all of ourselves and our emotions to our work and sometimes there isn't enough money in the world to buy certain paintings. The market we delve in is always transforming. I'm not a conservative, I have the ability to adapt and I credit Novica for offering an innovative, easier, and more democratic way to reach the public."

David da Costa has exhibited his work extensively throughout Brazil, U.S., France, and Portugal. He has received several awards including the Special Medal (Brazilian- Japanese Institute, 1975), and the Silver Medal in Painting in 1983. His work is referenced in several art dictionaries and books, including Verbete do Dicionário de Pintores Brasileiros (1989), Bozano-Simonsen publishers.