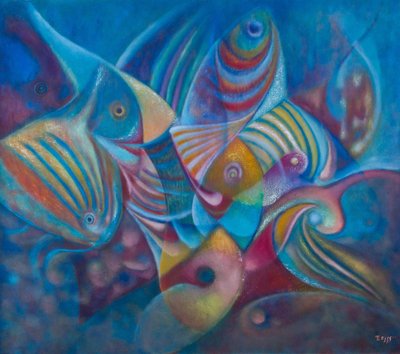 Hovering near the ocean floor, fish seem to converse in hushed voices. Theus creates a sensation of wonder in a magical world of the imagination. Bubbles refract the light filtering down from the surface. The Peruvian artist alludes to the story of a beautiful fish with scales in a rainbow of colors. One day, a small blue fish asked for one of the colorful scales. But Rainbow Fish said no and treated Little Blue Fish badly. All the other fish shunned Rainbow Fish until a wise old octopus advised him to give one pretty scale to each of the other fish. Rainbow Fish did so. He no longer had his colors but he had many, many friends.

You can find our 'rainbow Fish' (2015) by Theus in paintings categories such as Animal Themed Paintings, Seascapes Paintings, Surrealist Paintings, Abstract Paintings and Cubist Paintings. Enjoy exploring these sections for other Novica treasures.

Theus has received 2 microcredit loans with 0% interest from Kiva and Novica, the first for $1000 and the most recent for $1000.

"I'd say that, like a kind of Don Quixote, I sought my identity by living in a large, abandoned water tank near the ocean."

Theus Alayo was born on June 24, 1955, on the Summer Solstice and day of the Inti Raymi, or "Sun Festival."

"I am self taught in painting and the understanding of art," he says. "Through art, I express a sensitivity toward beauty, and I inhabit a different world than most people. Therefore I left the city and, like a bird in flight, sought open spaces... beaches where I could find myself in the seagulls and the infinity of the sea. There I left behind my repression and, living alone, I paint, write and play music. It is something like a return to the past, trying to find oneself with an originality of form. This epoch is very evident in my paintings with the theme 'Flight' and in the deep mysticism of my 'Microteus' series.

"I'd say that, like a kind of Don Quixote, I sought my identity by living in a large, abandoned water tank near the ocean. I decided to think of it as a classroom, and experience the height and dimensions in a radius of six meters at an elevation of more than 30 meters. While I lived there, I identified with that tank in that it used to be a source of water, vital for the human being. For me, art is that vital element for my spirit's life. Without it, I could not live. So this is a place I will never forget - it is where I feel I became an artist. It is located at the site of an important ceremonial center dedicated to the pre-Hispanic deity Pachacamac. This made it possible for me to make the leap from the micro to the macro and to the cosmos itself."

Theus' life is filled with anecdotes as unusual as his paintings. One summer he improvised an open air gallery on the highway where vacationers passed by in their cars. Each Sunday he would stand there, trying to sensitize motorists on their way to the beach. "It was a marvelous experience in my life," he reminisces. "I met many art connoisseurs who are now my friends."

His works insinuate a latent eroticism interlaced with forms, color and composition, along with a sensation of freedom. Theus' commitment to nature is represented by birds and fish. Once, he painted a still life to be displayed in a Caribbean nations traveling exhibit. But nature had other plans. Hurricane Mitch affected the airline warehouse where the painting was stored, but his painting was miraculously saved. Today he keeps that work as his own and would never part with it.

Theus signs his name as TEO, followed by three lighting rods which he considers his trademark. They symbolize the energy in his art.