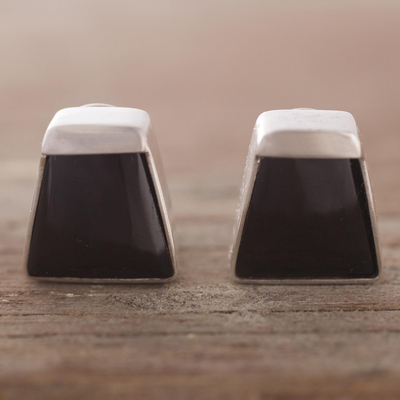 (62)
These earrings give a modern twist on a classic button earring with trapezoids... more

These earrings give a modern twist on a classic button earring with trapezoids of obsidian, dark as midnight. Set in sterling silver, the earrings have clip-on backs. These stunning earrings are designed by Sandra and Lily of Peru.

"I am wearing my beautiful ring everyday"

I was so pleased when I opened my little box. It fits perfectly, it is so pretty and it is so well made. My daughters want one for their birthday.

Absolutely beautiful and well made bracelet matching earrings and pendant from the same artist. I have got all these things as gift for my birthday. I wear it every day to feel loved.

Wow. This piece of jewelry is stunning. It is really beautiful. I highly recommend this if youre looking for the perfect gift. I think anyone would love to receive this as a gift! Or you deserve it for yourself!! It really is gorgeous. Looks lovely on. Just the right size... not too big and not too small.

This pendant is even lovelier than it appears in pictures. The blue green chrysocolla is perfectly polished and shiny and the craftsmanship is exceptional.

"A little bit of orange sunset!"

The stone and style are beautiful. Thank you to the artists for this.

You can find our obsidian clip-on earrings 'Midnight Window' by Sandra and Lily in jewelry categories such as Geometric Earrings, Obsidian Earrings, Silver Earrings, Sterling Silver Earrings and Button Earrings. Enjoy exploring these sections for other Novica treasures.

Sandra and Lily has received 8 microcredit loans with 0% interest from Kiva and Novica, the first for $1300 and the most recent for $1800. Proceeds were used to invest in a bulk purchase of gemstones and silver for her jewelry production.

To Sandra and Lily, their work is a constant source of inspiration, and both find motivation in the inner peace they feel as they create.

Sandra and Lily Indacochea are a mother and daughter team. Joined not only by family ties in common, they share a passion for art. They are both self-taught.

It all began as a game, when Sandra's little boy (Lily's grandson) was sent to fine psychomotor therapy. They both became immersed in the manual training until they realized that it had become more than a game they shared with the little boy. They realized that if they let their imagination run wild and allow their talents an expression, they could create original works of art. Sandra and Lily also recognized that in the process of creation they found peace and satisfaction.

Lily recalls that when she was a child she developed an unexplainable fascination for all kinds of stones. One day, when she was playing with other kids in her parents' ranch in the Nazca valley, she cut herself with an arrow. She kept the piece in her hand and treasured it for life, not knowing the stone's true name – obsidian. Now, many of her designs mainly feature obsidian. Lily loves to transform gemstones by giving them life through her designs.

Sandra always loved to hear her mother tell this and similar stories – thus her fascination for gemstones and the mysterious powers attributed to them. Yet she never thought she had it in her to work and create jewelry, until her son's therapy.

Finally one day, mother and daughter resolved to join forces and find out all they could about gemstones. At first it was difficult to find authentic gems so they traveled abroad to get them, until one day a friend told them that indeed one could find genuine stones if they looked in the right place. Sandra and Lily were encouraged to look further, and eventually they found good quality gemstones in Peru.

It's been a few years since they began formally designing and crafting jewelry, and they have been met with a large acceptance. They are also continuously invited to present their work at exhibitions and craft fairs.

To Sandra and Lily, their work is a constant source of inspiration, and both find motivation in the inner peace they feel as they create. Their designs seek to transmit and share the positive energy they receive from the stones.

Their biggest challenge was to transform their venture into an established family business and see it succeed. "Wearing one of our jewelry pieces will fill you with positive energy and good vibes. It will also highlight the beauty of what is natural, they say"
View all