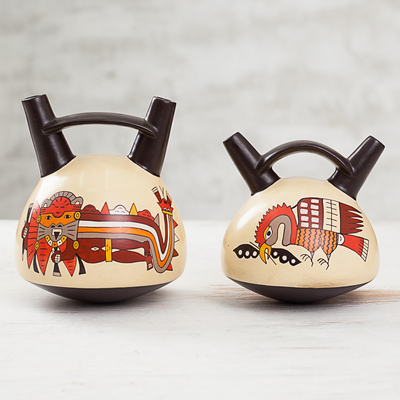 (15)
Drawing inspiration from the art of the ancient Nazca people, Peruvian artisan... more

Drawing inspiration from the art of the ancient Nazca people, Peruvian artisan Dionisio Rojas creates this striking pair of decorative vases. Each vase is handcrafted of ceramic, featuring a beige body with two black spouts that are connected by a bridge. The smaller vase features the hand-painted image of a condor bird while the larger one features the hand-painted image of a pre-Hispanic animal god.

Its a piece of strong, accurate architecture with the Nativity figures all beautifully placed and painted.

This splendid vase is the capstone of my collection. It is beautifully Crafted and will be treasured forever.

Just as nice as the photo. Arrived well packed. Thank you NOVICA for another wondeful connection to Peruvian arts!

Dionisio Rojas has received a $200 microcredit loan with 0% interest.

Dionisio Rojas Gutierrez has worked for many years - since the age of ten - as a ceramic artist, winning many art contests at local, state, and national levels.

The artistry of Dionisio Rojas Gutierrez has been featured in the Cincinnati Inquirer.

Dionisio Rojas Gutierrez is an artisan from the Andes mountains of southern Peru. He has worked since the age of ten with his cousins, who are also ceramics artists, and his aunt who had an art store in his hometown. Rojas sold his ceramic artwork locally as a teenager and won art contests at local, state, and national levels as his skills progressed. Alongside his lovely wife, he fully dedicates himself to his ceramic artwork, in particular churches, lamps, animals, and musicians.

He forms the vases on the potter's wheel, while figurines are shaped by hand or in a hand-made mold. The pieces are fired it at a temperature of 900º C (1,652º F). When they have cooled, Rojas paints the motifs and protects each piece with a coat of varnish.
View all