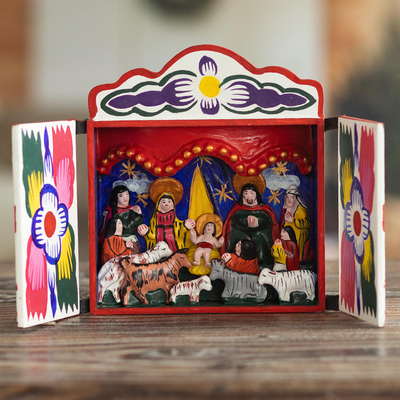 (167)
A great day has arrived; Joseph and Mary stand side by side, lovingly watching... more

A great day has arrived; Joseph and Mary stand side by side, lovingly watching over the baby Jesus. Accompanied by shepherds and their barn animals, the Holy Family evokes the spirit of Christmas. Alejandro Chavez creates this moving retablo scene, carefully crafting each figurine of plaster of Paris and painting them by hand.

A beautiful work of art. Cant wait to give this gift.

Love this colorful item and like that it can travel with me easily !

Always use this every Christmas as part of my familys nacimiento.

Exquisitely carved and painted and offered at a give-away price.

Now I have a compact Christmas decoration when I travel. It comes in its very own box. This is unusual and authentic and probably should be described as primitive art with not as much detail in the painting as I had expected.

"A beautiful work of art!"

Love it and was a wonderful addition to my collection.

This mirror is so pretty. I really enjoy looking at it.

This is a very detailed, beautiful retablo rendition of the nativity story with colorful details from S. American culture. It has been displayed many times at the annual Christmas Creche Exhibit held every year in Palo Alto, CA. I am proud to have it as part of my nativity collection.

The artist masterfully introduces Peruvian peasants to the Birth of Jesus.

Novica sales provide Alejandro's family workshop with a steady cash flow. These sales account for nearly half of their monthly income, helping to ensure their survival. Markets and other seasonal outlets provide supplemental income that contributes to their annual living expenses. In the coming years, Alejandro hopes to grow his workshop and better his family by increasing his Novica sales.

At school in Ayacucho, Alejandro began to learn the indigenous art of Andean retableria. Seeking to refine his craft, he apprenticed at the workshop of Angel Castro to learn the secrets of a master retablista. Upon his teacher's death, Alejandro founded his own workshop. There he began to incorporate his wife's modeled figures into his traditional retablos. Today Alejandro's nephews are his apprentices and his family workshop continues to craft their beloved retablos, which recount the culture and traditions of the Andes.

One year away from his 50th birthday, Alejandro and his wife adopted a son and a daughter (Jose and Carol) from their hometown. Today Alejandro continues to provide for the education of his children and his grandchild, who joined the family in 2018. His daughter Carol is studying accounting and his son Jose is at the police academy.

Alejandro Chavez has received 4 microcredit loans with 0% interest from Kiva and Novica, the first for $800 and the most recent for $1100. Proceeds were used to invest in the purchase of raw materials such as plaster, ceramic, plywood and paint.

"Over the years, I perfected my abilities and became a master retablo craftsman. In some, I depict Biblical scenes and, in others, everyday life in the Andes."

Alejandro Chavez was born in Lima in 1956. He specializes in creating retablos, a kind of reverent diorama-altar typical of the Ayacucho region of Peru. He learned this technique as a boy in school, when living in Ayacucho, where his parents moved when he was just two years old.

For Alejandro and his family, the 1980s were painful. All of Peru was bleeding as a result of the armed conflict between the Sendero Luminoso terrorist group, who threatened and conscripted rural farmers, and the Peruvian army, who arrested or killed anyone they found suspicious. The Chavez family fled to Lima where they found peace once more through their retablo art. However, they lost several of their friends.

"Some died, others were jailed, even when they didn't know how to read or write," he says. "Because of the war, they had to drop out of school and leave the artisan workshops they loved in nearby Huamanga. They acquired some knowledge of the retablo art but they withdrew because it was no longer safe to leave their homes.

"Life in Lima was quite different. The quiet small town life we were accustomed to no longer existed in the huge cement jungle of the capital. Our traditional Ayacucho fiestas such as the yunza tree and the Dance of the Scissors, have died out here.

"To fight boredom, I worked at different jobs. People like me who had recently arrived in Lima began working as stevedores in the city's fishing port. After that, I sold fruit in a market stall. Finally one day, a cousin convinced me to try my luck in a workshop where they crafted Ayacuchan retablos. When I visited the workshop, I couldn't believe it when I saw these beautiful art forms once again.

"So I returned to my roots. I began working in the studio of Angel Castro, a master artisan, who taught me. Here I refined my techniques. After the death of my teacher, I formed my own workshop continuing to give shape to this art form. The customs and traditions of the Andean people — especially those of Ayacucho — emerge in every piece we make.

"Over the years, I perfected my abilities and became recognized as a master retablo craftsman. In some, I depict Biblical scenes and, in others, everyday life in the Andes. I did this for eight years. It was exhausting to create my retablos and then try to sell them in artisan fairs. I had to carry several at a time and go door to door, offering them to shops and stores.

"I've been married since 1985 and my wife and I successfully faced some really tough times. We were unable to have children. We finally gave up on fertility treatments and decided to adopt. We found a seven-year-old girl and a three-year-old boy, and raised them with all our love as though they were our own. Now that they're older, the girl is here with us and the boy went to live with my mother in Ayacucho.

"I began working with you in 2007 when I learned your support could let make a living from my art and give me the hope of a better future. Thanks to what I earn from the sale of my retablos, I've been able to give my family a better lifestyle and, especially, to help my daughter Carol with her studies now that she's a young mother. Since then, things have gone well.

"Today, I can say that my pain from those difficult times in Ayacucho has healed. I've been sharing the culture and traditions of Peru through my retablos. And I plan to continue with this art as long as God permits it."
View all