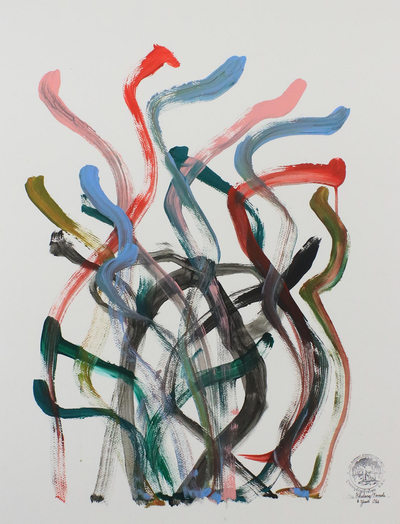 (1)
An intelligent and playful elephant from Thailand, Kelang paints this passionate... more

An intelligent and playful elephant from Thailand, Kelang paints this passionate composition, utilizing her characteristic style that features expressive, waving lines with simple colors. The colorful nature of this painting resembles the sweet succulence of jelly beans.

This lovely painting now occupies a prominent spot over my mantle. It?s simply gorgeous. It arrived in wonderful condition and we just love it!!!!

"Kelang's character is playful, naughty and sometimes stubborn. She took only about two weeks to learn painting and, during training, she was good-natured and cooperative."

Kelang, also known as Pang Khelang, is a female Thai elephant. Khe-lang, which means "city," is the old name of Lampang province. She was born in 2009, the third offspring of Pang Singkhorn and Phlai Pha-me. Kelang has an elder brother, Phlai Kaew, born in 2001 and an elder sister Nua-un, born in 2004. Nua-un is also a featured Novica elephant artist.

Kelang's character is playful, naughty and sometimes stubborn. She took only about two weeks to learn painting with her mahout (keeper) and, during training, she was good-natured and cooperative. Kelang is very popular and intelligent. She is one of the elephant school show members on the demonstration field, and can show off her ability to follow basic commands and make specific body movements. Kelang will even put on her mahout's hat!

Her paintings are abstract, always incorporating firm vertical lines of color, which makes her paintings look bold but also steady and calm.

In 1998, searching for new ways to raise rescue funds and worldwide public awareness, elephant expert and author Richard Lair, advisor to the royal Thai Elephant Conservation Center (TECC), conceived of a novel plan. He invited to Asia two media savvy, New York-based conceptual artists — Vitaly Komar and Alexander Melamid — to help him create a publicity campaign while training rescued Asian elephants to paint. Art historian Mia Fineman traveled with Komar and Melamid to Asia, helping write "When Elephants Paint," a fascinating book about the venture. (The book notes that wild elephants naturally doodle on the ground with twigs and pebbles — a proclivity that might explain the ease with which they take to painting.)

Interestingly, the TECC is also home to the Thai Elephant Orchestra, the world's first elephant orchestra and the first orchestra in which animals play instruments (as opposed to their own song) with "serious musical intent." The Thai Elephant Orchestra, under the direction of Richard Lair and Dave Solder, has produced three fundraising CDs, available through Amazon.

Novica asked Lair about the legitimacy of a much-talked-about 2008 elephant "self portrait" (the making of which, at a different Thai elephant camp, was captured on video). Lair explained that the elephant's mahout (handler) clearly directed the painting, standing just off-camera, holding the elephant's tush (small, sensitive tusk) to carefully guide the elephant's trunk in precise flourishes, creating the sensational results.
View all