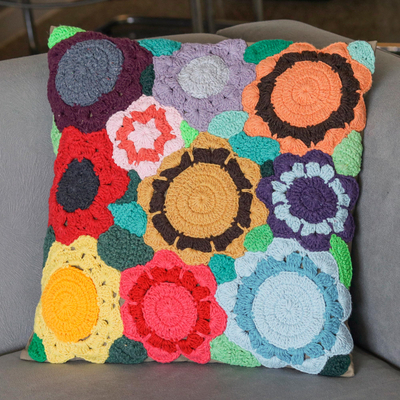 Detailed with multicolored floral motifs, this Brazilian cushion cover is presented by the ArtFio Artisan Association. Local artisans hand-crochet the cushion cover of cotton for a pleasing texture. The back features a solid color in taupe with a zipper for inserting a cushion.

You can find our cotton cushion cover 'Flowers of the World' by ArtFio Artisan Association in pillows & throws categories such as Floral Cushion Covers and Cotton Cushion Covers. Enjoy exploring these sections for other Novica treasures.

In the small town of Sao Goncalo do Amarante, knowledge of their specific crochet technique is passed down from generation to generation by the women of the families that are part of the association.

Their work has been seen on national television programs and in newspaper articles, especially when the artisans began to decorate trees in the community with their crochet for Christmas festivities.

The ArtFio recently became a NOVICA artisan group. They are working hard with the hope that this opportunity will help them grow and provide more income for their families.

In 2012, The Association of ArtFio Artisans was awarded as one of the 'Top 100 Artisans of Brazil' by the government.

The Association of ArtFio Artisans supports and provides for the education of the children of each member.

Dona Luidina... with only two years of schooling, has a daughter graduating from the Federal University of Ceara with a degree in administration.

Artfio is an association of artisans from a small town in São Goncalo do Amarante in northeastern Brazil.

Currently composed of 42 women crochet artisans, the group was formed at the end of 2001, and was formalized in April 2004 in order to strengthen a culture that already had centennial roots in the locality. Here, knowledge is passed down from generation to generation by the women of the families that are part of the association through observing the crochet technique.

Our work was seen on national television programs and in newspaper articles when the artisans began to decorate trees in the community with their crochet for Christmas festivities. According to Dona Maria da Conceição Juvencio de Souza, president and co-founder of the association, this is also a way of focusing attention on the ecological issue of preservation of trees and the environment.

The art of these Ceara artisans has crossed the borders of this small city of under a thousand people and has traveled to other Brazilian cities. "The community is very small and lives on subsistence agriculture. There was a lack of jobs, and handicrafts appeared as a source of income," she explains. She strongly believes that working with Novica will give continuity and worldwide visibility to the art and craftsmanship of these talented women who have seen their self esteem increase as they generate income for their families and their own community.

Dona Conceição is very proud of their achievements so far and highlights the case of Dona Luidina who, with only two years of schooling, has a daughter graduating from the Federal University of Ceara with a degree in administration.

One of Dona Conceição greatest dreams is to have a definite place for the association, since the current one is provisional, and it is important to encourage and promote the development of the youth of the community and thus perpetuate for the next generations the identity of this craft so representative of this small Brazilian town.