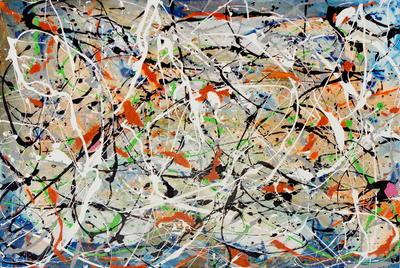 Multiple colors travel on spontaneous paths that appear through the artistic spell of Osvaldo Marci Cardoso. Painting with a palette of intense shades of red and ocher as well as blue, black, and green, the Brazilian artist adapts abstract expressionist techniques to create an energetic composition of great visual impact.

Osvaldo Marci Cardoso has received a $550 microcredit loan with 0% interest.

"Though he is an intellectual by training, the artist rejects intellectualism in his work and in his daily existence."

Since he was young, Osvaldo Marci, born in Barra do Pirai, always felt a great desire to create. He began to draw when he was a child, and he has nurtured his passion for art to this day. Osvaldo enjoys maintaining his work, as well as his life, quite simple. Though he is an intellectual by training, the artist rejects intellectualism in his work and in his daily existence.

Osvaldo's work is directly linked to the trajectory of his life. Highly influenced by the American master Jackson Pollock, Osvaldo paints with a gestural style, through which he expresses his vision of the world around him. Osvaldo's pieces are fundamentally pictorial, a quality which allows the viewer to appreciate the world conveyed by the artist on a purely visual level.

The content of Osvaldo's paintings is linked to a variety of themes: the environment, the favela (name for the poorest neighborhoods of Brazil), world news, and politics, among other issues. Osvaldo absorbs the life that exists around him and transmits his resulting thoughts and visions to the canvas using the gesture as his instrument. Osvaldo creates a highly relaxed, creative atmosphere in his studio, where he listens to music and emphasizes environmental harmony. The artist enjoys developing multiple pieces at once, sometimes working on as many as ten canvases simultaneously.

In his day-to-day existence, Osvaldo focuses much of his energy on social and ecological issues, participating earnestly in the improvement of problematic situations related with these areas. Besides working as a painter, Osvaldo serves as president to the Conciência Ecológica (Ecological Conscience), an organization dedicated to the environment.

Osvaldo supports himself through his artwork. He began selling outside the local art market of Rio de Janeiro, since the bulk of his sales was conducted through personal contacts with actual collectors. In the second phase of his work, Osvaldo abandoned his studio and moved to Roçinha, the largest favela in Latin America, where he directed and participated in various cultural activities for the needy neighborhood's inhabitants. His experiences in Roçinha were immediately reflected in his work, through whose expressionist and abstract tendencies Osvaldo began to investigate a pictorial territoriality that expresses on the surfaces of his canvases a certain Brazilian identity.
View all