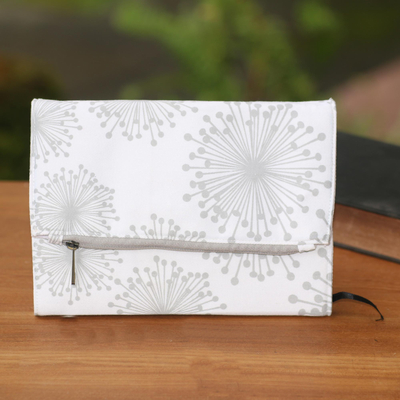 (1)
Against a body of eggshell, dove grey motifs that resemble bursting fireworks... more

Against a body of eggshell, dove grey motifs that resemble bursting fireworks are printed onto this cotton journal from Java. By Hari Ratih, this charming journal features a zipper pocket on its front flap, perfect for storing pencils, pens, and other small items. The journal opens with a magnetic snap, revealing 200 pages of recycled paper for recording your thoughts and memories.

"Perfection, just what I was looking for!"

I love the colors and the Ikat pattern on these covers.

You can find our cotton journal 'Dove Grey Fireworks' by Hari Ratih in decor accessories categories such as Modern Journals and Cotton Journals. Enjoy exploring these sections for other Novica treasures.

“My name is Hari Ratih. I was born in Klaten. Previously, I would have just described myself as a worker; someone who would work for someone else, who did not have an artistic spirit, and who did not work alone.

“That was until 2014, when I decided to resign from a high position in my company due to mistreatment. At that time, I was applying for jobs in several companies. While waiting for a call, I would fill my time with things that I have liked since I was a kid, such as working with fabrics and sewing machines.

“My mother is a tailor who works on a sewing machine. As a child, I would entertain myself with my mother’s collection of fabrics. The first things I made were cushion covers and table runners. I tried selling my pieces on social media, and received good responses from my friends. I continued making requests that I would get from friends and friends of friends.

“Since my posts got good responses, I thought that social media was the reason why my cushion covers and table runners were selling so well. But, it turned out that they were selling well because they were made from traditional batik cloth, which at that time was commonly used only for clothing. In my opinion, however, the characteristics of the traditional motifs and bright colors are very suitable for home furnishings.

“During the start of my venture, I was assisted by my mother, even though I knew that she was worried. According to her, being a tailor was not a job with good prospects for the future. She warned me about this, and advised me to focus on my job applications. But, she still helped me and gave me the information that I needed, such as where to get my materials.

“In this way, I began to work independently, not working for other people, especially since I was receiving good responses from the people who would buy my products. This work is kind of addictive; so I bought a more modern sewing machine and other tools that I needed. Eventually, I began convincing my mother that there was a future in being a tailor.”
View all