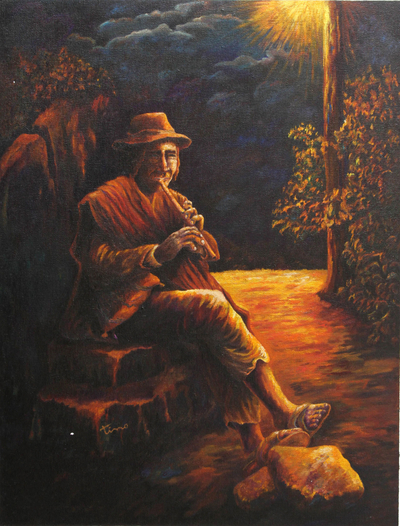 Alone at night, an elderly gentleman finds companionship in music. Leoncio Tinoco depicts the flutist by lamplight as he coaxes a plaintive melody from his flute. Bathed in golden light, he emerges triumphant from blue shadows.

You can find our 'melodies II' by Leoncio Tinoco in paintings categories such as Dance and Music Paintings, People and Portraits Paintings, Impressionist Paintings and Oil Paintings. Enjoy exploring these sections for other Novica treasures.

Mr. Tinoco has been awarded Peru's highest arts honor: the Amauta Title, distinguishing him as the wisest and most skilled living person in his craft.

Mr. Tinoco's artistry has been featured in numerous periodicals, including The Miami Herald.

Mr. Tinoco has been awarded Peru's highest arts honor: the Amauta Title. A title historically linked to the Incas, an Amauta is distinguished as the wisest and most skilled living person in his craft. Mr. Tinoco's commemorative tapestry "The Afghan Girl," is on display at National Geographic's headquarters in Washington D.C.

Mr. Tinoco has also generously shared his culture and traditional weaving techniques as a guest lecturer at Los Angeles area schools, where he received standing ovations from students.

"My name is Leoncio Tinoco Rodriguez, but people call me 'Tino.' I was born on September 27, 1954 in in Tarma, an area often referred to as 'The Pearl of the Andes.' I grew up amid twisted strands of wool, surrounded by weavers. The region's plants, forest moss and bark are part of me too, as important as the art of weaving.

"Well, I guess the art of weaving is like an excellent friend to me. Early in life I developed the técnica del relleno, or 'filling technique,' which consists of placing dyed, untwisted wool between strands of wool yarn in such a way that the tapestry ends up looking as though it were painted.

"I studied weaving in an artisan workshop called Vegadi. I studied painting, but specialized in weavings. I have since participated in many art contests and exhibitions."

In December of 2001, Mr. Tinoco was awarded Peru's highest arts honor: the Amauta Title. A title historically linked to the Incas, an Amauta is distinguished as the wisest and most skilled living person in his craft.

Tino is the youngest person ever to win the Amautas title - no one under age of 60 has won that title in last 100 years. He asked us to pass his thanks to all of his clients at Novica, saying that he may never have been able to afford to continue working and fine-tuning his art had it not been for their patronage.

Other awards and distinctions won by Leoncio Tincoco: