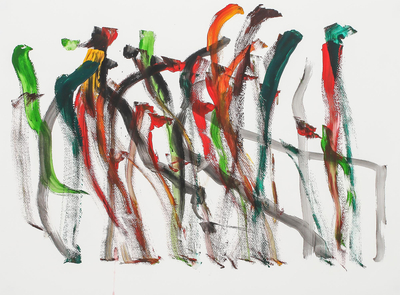 Resembling a line of students ready to return to school, vertical strokes of the... more

Resembling a line of students ready to return to school, vertical strokes of the paintbrush are used to create this elephant art painting from Thailand. Luuk Khang the elephant paints this impressive abstract composition.

Luuk Khang's artwork is notable for its long vertical slashes, always starting at the top of the page and usually running off the bottom. Although she is now experimenting with a new style....

Luuk Khang is a young elephant who enjoys painting. Her artwork is notable for its long vertical slashes, always starting at the top of the page and usually running off the bottom. Although she is now experimenting with a new style, which coincides with the arrival of her new mahout (keeper). Luuk Khang is an inseparable buddy of another artistic elephant named Prathida, both being mischievous and full of life.

In 1998, searching for new ways to raise rescue funds and worldwide public awareness, elephant expert and author Richard Lair, advisor to the royal Thai Elephant Conservation Center (TECC), conceived of a novel plan. He invited to Asia two media savvy, New York-based conceptual artists -- Vitaly Komar and Alexander Melamid -- to help him create a publicity campaign while training rescued Asian elephants to paint. Art Historian Mia Fineman traveled with Komar and Melamid to Asia, helping write "When Elephants Paint," a fascinating book about the venture. (The book notes that wild elephants naturally doodle on the ground with twigs and pebbles -- a proclivity that might explain the ease with which they take to painting.)

Richard Lair provides Novica with the TECC's highest quality elephant paintings, directly overseeing special "Novica Sessions" with the TECC elephants. For these sessions, the elephants paint on French archival paper, using high quality acrylic paints. (This in contrast to the elephant paintings sold in Asia to tourists -- typically composed of low-quality paints on non-archival paper.) Lair completes the process by embossing each painting with an official stamp of authenticity. For Novica, Lair comments that he rejects all but the most intriguing and unblemished paintings, as an additional way to thank Novica's customers for their considerable support, while providing a high quality painting in return.