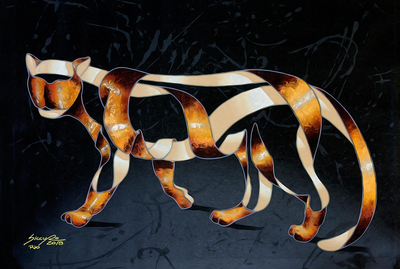 Rippling ribbon creates the illusion of three dimensions, giving life and intent to a tiger. Padding sinuously across the canvas, it turns an empty gaze at the viewer. Blue and golden contours against the dark night sky take on the sensation of a dream in this original artwork from Brazil's Ricardo Siccuro. This limited edition piece is printed through a sublimation process.

"It makes my room livelier!"

One of the two original artworks I own! Wonderfully coloured,it remains pristine after many years!I adore this painters style!

This artwork is really nice.

I have both 'Seated Cat in Blue' and 'Roly-Poly Tiger Cat and they look great together.

You can find our print 'The Tiger' (limited edition) by Ricardo Siccuro in paintings categories such as Animal Themed Paintings, Surrealist Paintings, Ink Paintings and Print Paintings. Enjoy exploring these sections for other Novica treasures.

"...one day in 1998, when reading a book on spiritualism he opted for a better quality of life. Ricardo decided to return to painting...."

Born in Rio de Janeiro on August 5, 1956, artist Ricardo Siccuro's life was disrupted when at the age of 15 he was hit by a car. Even though he didn't suffer great physical injuries, he seemed to have suffered emotionally and became depressed - he did not want to leave his house. It was then that he began to paint surreal images with the materials at hand: an ordinary pencil and paper.

Less than two months later he was exhibiting his work at the XXII Salão Nacional de Arte Moderna alongside renowned Brazilian artists of the time. Motivated by the experience, Ricardo began to use better quality materials until he eventually mastered the work in oils. He became an architect and left painting on the side until one day in 1988, when reading a book on spiritualism he opted for a better quality of life. Ricardo decided to return to painting, to which he has since dedicated his life entirely. Ricardo's paintings have been exhibited in Brazil as well as in the United States, France, Italy, Spain, England, Canada, Mexico, Venezuela, Argentina, Ecuador and other countries around the world.

Initially, his style was undeniably surreal, but over time his technique evolved to include an exceptional new style where figures are formed through the use of flowing ribbons and variations in light and shadows. Ricardo has named this innovative style "figurative serpentine."

He tells us, "Modern man has become used to making sense of a life at times riddled with absurdities; times when logic and rationale simply do not apply. My work is made of elements disassociated from their everyday function, with the purpose of awakening the viewer's curiosity and imagination. They are images filled with symbolic meaning, repeated in different series, each embracing its own theme.

"My latest line of work reflects my oldest style, which I began in 1972. The execution of the work is slow and meticulous, where ideas come one after another. I will always admire the work of past masters, including Dalí, Escher, Magritte, de Chirico, Max Ernest and Juarez Machado, a Brazilian artist.