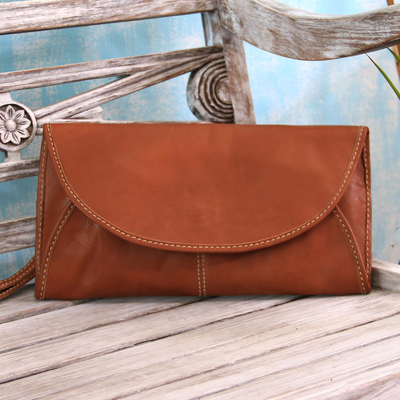 Leather Envelope Handbag in Sepia from Java, "Easygoing in Sepia"

(3)
Easygoing and stylish, this handbag from Java is designed by Rella Tung. She... more

Easygoing and stylish, this handbag from Java is designed by Rella Tung. She works with supple leather in a solid sepia hue to craft this envelope bag by hand. It can be held like a clutch, like a wristlet with a removable wrist strap, or like a sling with a removable, adjustable strap. The front flap opens with a magnetic snap to reveal a faux suede-lined interior, complete with one zipper pocket for organizing your belongings.

"Beautiful in every way!"

When I saw the bag Moka Vibes from Rella I knew that it was for me. This bag is everything I was looking for...the shape, size, quality, color, and the beautiful tassel. This bag is absolutely beautiful, Rella was able to create this beauty with a hobo vibe but chic at the same time. The quality of the leather is exceptional and I am sure that it will just get better with time. The lining is super soft and I LOVE the variety of pocket and dual compartment, There is a large padded zipper pocket in the middle that is perfect to keep your phone/tablet safe. I can go on and on with this review. I am so thrill with this purchase, Thank you so much Rella!

I absolutely love this handbag. The color, classic elegant design, soft inside and exceptional work made it irresistibly beautiful. I am so happy to have it. Thank you and keep up a great work.

I had looked at this bag online for about 3 days before ordering it. I couldnâ€™t get it out of my head! It arrived yesterday, and it is even more stunning in person. Bigger than I anticipated (which is good), the ginger color is gorgeous, the lining is unbelievably soft, and the quality construction is evident. I have never owned such a luxurious handmade item before, and it is now one of my most prized possessions!

You can find our leather handbag 'Easygoing in Sepia' by Rella Tung in handbags categories such as Leather Handbags, Clutches Handbags and Wristlets Handbags. Enjoy exploring these sections for other Novica treasures.

Rella Tung has received a $600 microcredit loan with 0% interest.

"Our town is known for its leather crafts and I became interested in leather handbags. I enjoy simple but elegant designs so I decided to create my own."

"I was born in Sumatra in 1976 and grew up there as the fourth of five children. My father was a businessman and traveled a lot while my mother was a homemaker and stay-at-home mom.

"I was a tomboy and most of my friends were boys. I was a very active and athletic child who loved to swim, run and climb trees.

"During my last year of high school, I became interested in the German language and studied it at school. I was determined to learn and was very studious. My hard work paid off when I received a scholarship to the University of Indonesia to major in German literature. I was ecstatic! I attended the university for six years.

"While there, I met my future husband, Jiway. We married and had two children who are now both teenagers.

"My husband and I started a project to create an organic farm to recruit street kids to teach them, instill discipline, hard work, teamwork and responsibility. We called it The Learning Farm.

"I branched out to create a catering and bakery business specializing in baked goods and food using no preservatives. We worked on this project for six years and then decided to move to Java when my husband received a job opportunity.

"Our town is known for its leather crafts and I became interested in leather handbags. I visited a few leather workshops but the designs did not suit my taste.

"I enjoy simple but elegant designs so I decided to create my own. After using some of them, people became interested in them and I decided to start selling them. At first, only my friends on social media purchased them. Later, people from other Indonesian cities from other countries began buying them, too.

"I use premium leather and materials I choose myself to ensure quality. My designs are simple, elegant and have a timeless charm. Every bag is made with attention to detail by the experienced artisans who assist me."
View all