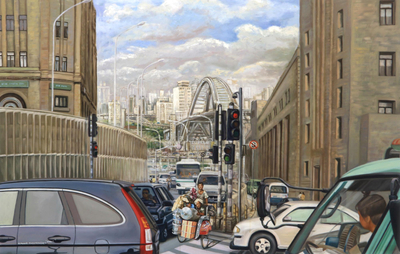 In a city that could be in any country in any continent, Made Pasek Kusuma Wijaya depicts a busy road where among the fancy cars the most humble of street sellers smile as they face their daily routines. The Balinese artist paints with oils to create a vivid composition with a strong social justice theme.

You can find our 'humble Center' (2010) by Made Pasek Kusuma Wijaya in paintings categories such as Cityscape Paintings, Realist Paintings and Oil Paintings. Enjoy exploring these sections for other Novica treasures.

"My inspiration comes from my own imagination, which I then paint so as to make possible for others to see."

"I was born on October 25, 1976, in a cool, green farming village in Bali. I am the second of three children from a well-to-do farming family. My brothers and I all went to the Art School of Denpasar. I started to paint even before entering preschool, but became serious only in primary school. During that time I was involved in school competitions and then entered the Fine Art School and by then was already selling my works.

"As an art student I learned and experimented with many styles and techniques. My work has continually evolved. I started by painting Mahabharata epics, then transitioned to Naturalism, and eventually found my own genuine style of Surreal Naturalism.

"I consider my style self-taught. My inspiration comes from my own imagination, which I then paint so as to make it possible for others to see. Themes I like to explore are meditation and contemplation. My medium of choice is oil on canvas.

"My dream is that through my paintings Balinese culture and art will become recognized internationally.

"I have exhibited at many venues including in a group exhibition called 'Sekolah Seni Indonesia' at Yogyakarta the year of 1999. I really enjoy working with the Novica team, because of the possibility of selling and promoting outside of Indonesia. And I hope that through Novica my work can become renowned internationally.

"Here is a story about something that once happened to me. I had brought a painting to a store in Sukawati and the owner said that the painting was no good. I knew he wanted to have it, so he tried to intimidate me in front of a lot of people because he wanted it at a cheap price. So I took the painting back home with me."