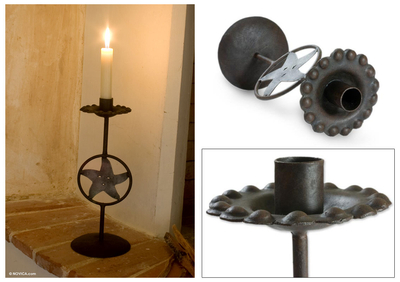 This candleholder by the Godoy Family captures Guatemala's traditional elegance. They craft it by hand, expertly forging iron with detailed artistry featuring a festive star and a florid candle holder. (Candle not included).

You can find iron candleholder 'Starlight' by Godoy Family in lamps and lighting categories such as 1001 Summer Nights Candle Holders and Metal Candle Holders. Enjoy exploring these sections for other Novica treasures.

This artist shows a lot of talent or potential and is in their late teens or twenties.

From 1907 to this day, the Godoy Family works as a team where everyone's talent and input is respected, and everyone works together.

In 1907 Don Florencio Godoy arrived in Guatemala and made it his home. Born in Spain, he was a highly respected man for his noble heart, and was a known as a man of principles and good values. He dedicated his life to his work, and his imagination knew no boundaries. He built the first projector of silent films in Guatemala with pieces he himself had made. He exhibited it in 1913 at a school fair, and that was when he formally started his own workshop.

Don Florencio's forged iron work is known throughout Guatemala as being creative, of top quality and of varied designs. He taught his children the value of hard work and the artistic intricacies of forged iron. His sons did inherit this passion, and Victor Manuel, his second son, took over the running of the workshop when Don Florencio passed away. Through his own talent and skill, Victor Manuel has preserved the creativity and high quality associated with his family's name.

From 1907 to this day, the Godoy Family works as a team where everyone's talent and input is respected, and everyone works together.

"Grandfather's strength was in forging, and that's our specialty," says Wilson, who represents the family's third generation and is Victor Manuel's son. "Most people work on soldering since it is faster and cheaper, whereas forging is traditionally considered to be more artistic, one can create true works of art.

"My dad is in charge of everything, and the rest of us are involved in many of the tasks, such as in working at the workshop, designing, selling, dealing with customers, and forging. The way we work is by taking turns and each day we find out what we are supposed to do on that day.

"Throughout the years, trying to grow as a family venture has not been without its challenges considering the competition we've had. But we've seen it as a motivation to develop new designs for different settings, such as balconies, tables, and stair railings, as well as looking for new and diverse customers. Our designs have always been traditional, with authentic finishes and crafted with traditional techniques.

"It is always nice to count on an opportunity such as Novica – we feel happy and proud to be associated. It is exciting to know there will be people around the world who will appreciate our art – the art of the Godoy Family in Guatemala."

The Godoy Family 'Light of Antigua Guatemala' are Magnificent *