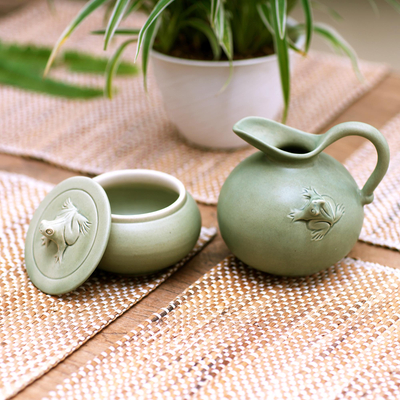 (133)
Chirping a cheerful rain song, tiny tree frogs sing of their home in the... more

Chirping a cheerful rain song, tiny tree frogs sing of their home in the Balinese rain forest. Their bright-eyed beauty adds a unique charm to teatime or mealtime. An original design by Putu Oka Mahendra, this attractive set of sugar bowl and creamer is crafted by hand. The flora of Bali play an important role in the artisan's choice of color - a cool blue-green inspired by ocean and rain forest.

"My Friend Loved this Gift"

The color of the ceramics and shape of the frogs are very organic and pleasant to look at. My friend loved this gift.

We love this teapot, we have been using it every day for the past 5 years. we have the same handle. If something happened to this teapot, I would immediately buy another one.

Tea always spills on the table. Not suitable for use. Cannot be recommended.

I ve used it with a hot beverage many times. But, I just enjoy holding it and looking at it! FUN!

Small flowers look wonderful in this vase! Thank You

Lovely vase that is simple, great color and size, and a nice touch to any area in your home.

Putu Oka Mahendra has received 3 microcredit loans with 0% interest from Kiva and Novica, the first for $1300 and the most recent for $1100. Proceeds were used to invest in hiring more artisans from his community to increase production.

Oka Mahendra opened a showroom in memory of his mother... She was a woman full of energy and highly self-confident.

Putu Oka Mahendra was born in the Tabanan regency of Bali on June 12, 1966. His mother, Made Tantri, pioneered ceramic artistry in 1980. She was a woman full of energy and highly self-confident. When she first started she undertook the entire crafting procedure by herself - from creating the design until finishing the product. She gradually developed a reputation for fine design and high quality and people started placing so many orders that she saw the need to hire assistants. In 1990, when Tantri passed away, Oka Mahendra took-over her work, and eventually opened a showroom in her memory.

To create his designs, Oka Mahendra finds inspiration in the luscious flora and fauna of Bali. In 1993, he was the third place winner for his ceramic designs in the Lomba Ceramic Design contest. Oka Mahendra has exhibited his handcrafted items at the Asian Trade Fair (ATF) at Jakarta in 1993 and participated in exhibits in Jakarta (1995 and 2000), Bali (1997-1998) and recently at the Korean and Hong Kong Embassies in Jakarta (2001).
View all