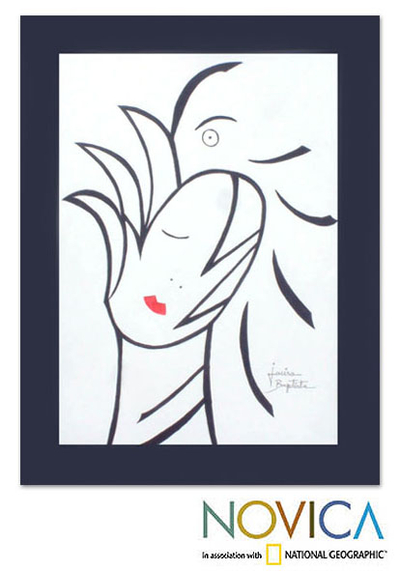 Painting with impassioned artistry, Jacira Baptista orchestrates the merger of forms into a surrealist masterpiece. Baptista's message is clear as she equals the feminine soul to the flowering blossom that welcomes the hummingbird.

You can find our 'hummingbird' by Jacira Baptista in paintings categories such as Floral Paintings, Modern and Freestyle Paintings and Ink Paintings. Enjoy exploring these sections for other Novica treasures.

"I am predominantly an artist of what is feminine...."

"I come from a family of sculptors, as my grandfather was a renowned artist and a professor at Recife's School of Fine Arts. People referred to his house as the "house of sculptures;" in the garden alone there were four of his great sculptures. When I was a little girl, I used to play at making mud sculptures at my grandfather's studio.

"Many years went by before my artistic roots began to give fruit. I got married, became a widow, and got married again. In the 1980s I took a course at Maria Thereza Vieira's studio and discovered the different techniques for sculpting and design and thus 'encountered' the modern style – quite a leap from the academic style that distinguished my family's work.

"My work is very personal, for it comes from my emotional subconscious. It's easy for me to create a piece from an idea, but I've always been resistant to the realism of classical art. I am predominantly an artist of what is feminine, maybe as a result of the abundance of female images in grandfather's studio. Sculpting male images was sort of a taboo, for as a little girl I wasn't allowed to see the figures of nude men that my uncles sculpted in a classic style.

"I've been experiencing an intensively creative period since the 1990s, and I've been participating in several exhibitions. Of these, I regard as the most important the one held at Rio de Janeiro's Museum of Modern Art. For this exhibition, I presented three pieces honoring Zumbi, king of the Palmares, the biggest most important black hero in Brazilian culture. I've also exhibited at the Stuttgart Cultural Center in Germany."
View all