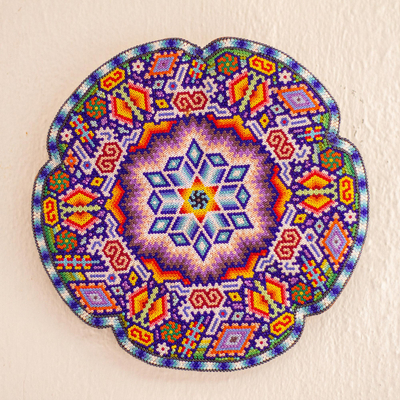 byKupihaute
Shaped like a blossom with five wide petals, this votive "painting"... more

Shaped like a blossom with five wide petals, this votive "painting" depicts white rabbits that chase each other in a counterclockwise direction. The long-legged creatures leap lithely amid colorful Huichol icons.

"The Nierika is a mirror, but a very special mirror, where two opposites meet creatively," Kupihuate explains. "So the one is reflected into each other, transforming one into the other, and at the same time creating something that synchronously synthesizes the essence of both.

"For example, the cactus of wise memory, the peyote, or hikuri and the cereal that currently nourishes all of humanity, the corn or iku. The creator of this artistic offering and its beholder who, upon acknowledging the message of its symbolism, will awaken their genetic memory, thus sharing their common millennial roots.

"This nierika in particular is the meeting of our star — the sun — in the center and the moon, the mirror that reflects the solar energy as a diamond, the vital movement on our planet Earth, which is symbolized by the rabbit that, in its running, makes the temporality of earthly existence.

"Inside the rabbit is represented the universal symbol of the eternal energy that animates it. The arrows are our dreams, our songs transforming our desires into realities, a transformation symbolized by the butterflies that — by distributing the seeds of our ancestors stored in the flowers — permanently feed back the earthly energy that nurtures our existence.

"The diamond figures represent the cosmos, the harmonic order that each one of us becomes when we transform ourselves in autonomous organisms in harmony with our entire earthly environment."

"This nierika was inspired by the lyrics of a song by Roger Waters named 'Breathe.'

Run, rabbit run...
For long you live and high you fly
But only if you ride the tide
And balanced on the biggest wave
You race towards an early grave....

The intricate images are formed with tiny seed beads, patiently placed one at a time with a needle on a huanacaxtle wood backing. Beeswax is used instead of glue. Because his name in the Huichol language means "obsidian butterfly," the artisan signs his work with the symbol of a butterfly.

"The essence of ritual art is to make it without any sketch or model whatsoever so each piece is an original without a possible copy...."

"My name is Kupihaute, which means 'Obsidian Butterfly' in the Huichol language. I was born in 1949 and, from a very early age, my passion has always been to look into my roots to hear the voice of my ancestors in order to know my phatway, my destiny. I have the influence of Michoacan from my father's side and from my mother's the legacy of one of the original cultural seeds of the American continent — the Huichol people.

"Since 1992, together with some other Huichol artists, I organized the Huichol Community in San Blas, Nayarit, in order to share with you our ritual arts as a traditional offering, without middlemen. To participate in the project of Novica is a natural convergence that enriches our mission, which is to disseminate our arcane wisdom, our symbolic language, our mystic culture, and our ancestor's legacy, and in this way invite you to look for your own roots to know yourself.

"The essence of ritual art is to make it without any sketch or model whatsoever so each piece is an original without a possible copy, and each piece conveys a traditional story of the Huichol people that rises from our deepest memory, from that common ground where all of us are the same people."

"The concept of the nierika, or votive "painting," is that it is a mirror where two opposites come together creatively. A very clear example is when a man and a woman come together to create a new person. The nierika is known as the tezkatl in the Nahuatl language, spoken by the Aztecs. And in fact the work created by a native of any culture can awaken in both artist and the person who views it an archetype from the collective memory in our genes. Thus, it is a way of sharing this wisdom."

Kupihaute elaborates his designs by applying colorful chaquira beads onto wood or dried guaje gourds — a technique requiring mental patience and a steady hand. The beads are adhered using wax, thus it is important that the works be kept away from strong sources of heat, which could cause the wax to melt and the beads to loosen.