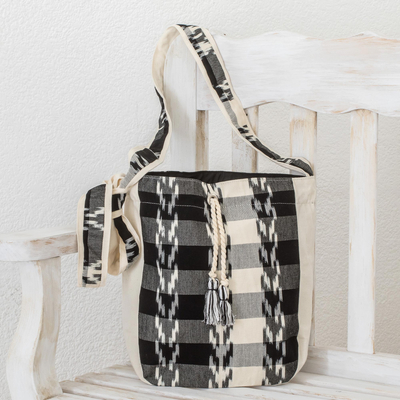 Combining hues of black and ivory, members of Guatemala's Aj Quen association hand-weave this bucket bag of cotton. This bag features stripes and chevron patterns, and drapes over the shoulder on an adjustable strap. Opening with a drawstring closure, it reveals a cotton lining with a zipper pocket on one side.

This lively tote has plenty of room for everything with being heavy or bulky. The pattern is lively and unique.

I love this tote! It s a little bigger than I need, but it s so adorable I use it as my daily purse. It is well-made and I adore the ribbon round it.

"Beautiful and so useful!"

This is beautiful and so practical at the same time...love love love!

You can find our cotton bucket bag 'Black and Ivory' by Aj Quen in handbags categories such as Hand Woven Handbags, Cotton Handbags, Shoulder Bags Handbags, Slings Handbags and Shopping Bags Handbags. Enjoy exploring these sections for other Novica treasures.

Aj Quen has received a $400 microcredit loan with 0% interest.

"The vast majority of our members work from home, which lets mothers stay with their children and look after their households."

The Aj Quen Association is one of the oldest weaving associations in Guatemala. It was founded as a non-profit development entity in 1989 through the efforts of six different artisan groups from various regions of the country. These groups came together to help preserve their cultural identity and to better market their art.

In Cakchiquel Maya, aj quen means "the weaver." The association includes 26 artisan groups for a total of 800 craftspeople, of whom 96 percent are women from four Maya groups – the Quiche, Cakchiquel, Tzutujil and Kekchi.

Over the past 20 years, the association has trained more than 40 artisan groups, many of which are now independent. "The social impact we've achieved is exciting," a spokesperson says. "We can't yet say that our artisans have overcome their poverty but at least they can eat three times a day. The same is happening with their family economy – today some of the women earn more than men! That would have ben totally impossible a few years ago.

"Our mission is to cooperate with the community's development as a whole, helping them to professionalize their crafting activities in the long run. What distinguishes Aj Quen from other groups is the training that we offer. We worry about production and marketing. But beyond that, we work to educate our members in other areas such as cultural, political and social concerns. Today, we have the support of international organizations and collaborators who have been able to raise the consciousness of our artisans and orient them about quality and design… and things like fair trade isn't about charging more and working less!

"Most members of the association don't know how to read and write. Their main activity is agriculture, which is Guatemala's principal source of income. They use weaving techniques inherited from their ancestors, passed down from generation to generation, and they sell their textiles in the local markets. They realized they needed to organize themselves.

"Today, with the help of courses taught by the association, almost all our artisans have completed their diversified training cycle. Only a small percentage of those who live in villages farthest from towns haven't been able to go to school. However they do participate in our courses and the association supports their efforts to learn to read and write in their respective Maya languages.

"Some of the artisans who have developed outstanding designs have had the opportunity to travel to Italy where they received training in workmanship and quality control. At the same time, they visited stores that promote fair trade products and saw how they are exhibited and marketed. That's been a wonderful source of motivation for them.

"The vast majority of our members work from home, which lets mothers stay with their children and look after their households. But we also have women's groups that have formed their own little workshops, and others who come to Aj Quen when they need a place to work.

"Generally, only quality control and packaging is done in the association workshops, where we have ten employees and the support of a foreign collaborator.

"Our designs include the weavers' own traditional Guatemalan designs as well as those developed by international designers who have helped us at one time or another.

"We weave our own fabric on handlooms operated by foot pedals and on back strap looms. The textiles are then embroidered and sewn, and in this way, a single item can be created by more than one group – each group specializes in different techniques. We provide the materials and the artisans are paid by the piece. Each group has its own funds and representative. We are very well organized!

"Even so, we've had our difficult moments, too. The effort of integration and working together to fill our first export order were real challenges.

"This group of craftspeople who have made their dream come true, whose collective effort has let us become agents of our own development, we thank you for giving us this opportunity for further growth. Aj Quen weaves more than fabric. It weaves culture."
View all