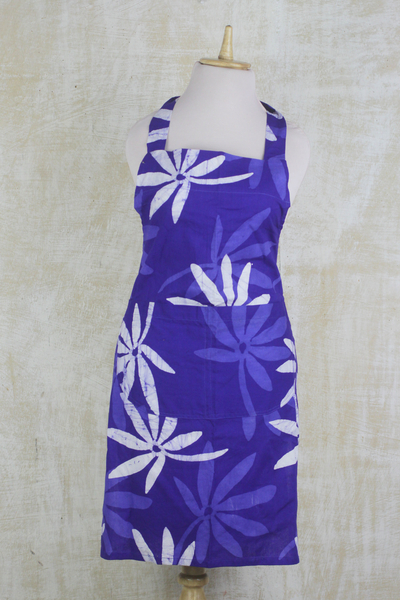 (1)
Artisan Hannah Dodoo crafts this beautiful batik apron that is ideal for use... more

Artisan Hannah Dodoo crafts this beautiful batik apron that is ideal for use around the home. The lovely cotton fabric is patterned with off-white flowers that bloom over a royal blue base. The apron has neck and waist straps to ensure a perfect fit, and the front of the apron features two pockets that are great at keeping your items close at hand.

I love this case and will be using it as a purse. The quality is outstanding!

Hannah Dodoo has received a $300 microcredit loan with 0% interest.

"I took to this field because I knew fashion was broad and that would take me a long way... I train girls who are eager to learn a trade for their living."

"My name is Hannah Josephine Dodoo. I was born in the central region of Ghana on March 12, 1949. I started schooling in a Catholic girls' school, where my parents had been transferred. My family then moved back to our home town where I lost my father, who left behind two boys and four girls in the care of my mother. She managed to take me through my schooling to the polytechnic school, where I did a secretarial course.

"I joined an international banking firm in 1966 and was taken through different departments. Fortunately, I met a young man who happened to be at the bank to do some transactions. Unknowingly he spotted me. We got engaged and moved to Germany where we got married and are blessed with three children.

"My husband and I decided on so many courses which could benefit me on our return to Ghana, but in the end, we decided on apparel manufacturing, as a private student in one of the fashion houses in Germany. I took to this field because I knew fashion was broad and that would take me a long way. I returned home in 1979 and have been able to sustain my fashion work until now. Orders come in from America, Europe, etc. I have held several fashion shows and have participated in national trade fairs.

"I train girls who are eager to learn a trade for their living and also employ others to help me, which has reduced the unemployment situation some. Presently, I am the chairperson of the Progression of Women Credit Union, where we take care of women's needs. I also do handicrafts, home furnishing, and have gone through series of workshops and seminars on record keeping and business management."
View all