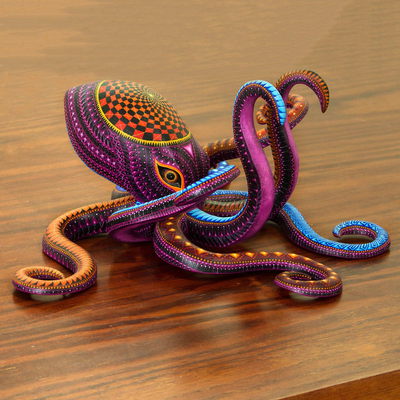 Rearing two of its tentacles with the rest of its appendages curled around it, a... more

Rearing two of its tentacles with the rest of its appendages curled around it, a vibrant octopus is the subject of this alebrije-style sculpture from Mexico. Pablo and Lucy Mendez create this eight-limbed sea creature, which is carved from copal wood and painted by hand with intricate, colorful designs.

Alebrijes are a fairly recent Mexican art form, attributed to Pedro Linares. Unconscious due to illness in 1936, he was presumed near death and yet his dreams were extremely vivid. He tells of a place where all was peaceful and quiet until all of a sudden there appeared a lion with an eagle's head, a rooster with bull's horns and a donkey with butterfly wings. They kept screeching "alebrije, alebrije!" and Pedro began running away. He encountered a man who told him it was not yet his time to be there are and he should continue running towards the exit. In this dream Pedro climbed out of a window and regained consciousness.

You can find wood alebrije sculpture 'Fantastical Octopus' by Pablo and Lucy Mendez in sculpture categories such as Nautical Sculpture and Wood Sculpture. Enjoy exploring these sections for other Novica treasures.

Pablo’s profits from the alebrij sculptures he creates for NOVICA allow him to create and financially support a healthy life for his wife and two children.

Lucy's income allows her to provide a necessary basic education to their children in their home.

Pablo won 2nd Place in the Carved Wood Contest in the Mexican state of Oaxaca.

"What we enjoy the most is how real and mythical animal shapes can emerge from a simple branch. They can be so colorful and original that they appear to have had a life on another planet."

“We are a young and talented married couple that inherited the knowledge of carving and painting copal wood. We have gradually perfected our technique, which we have passed down to our children.

“We have been working for some years with this incredible technique that we learned. In our community in Teotitlan de Valle, it is a tradition for families to have knowledge of copal carving.

“We have several goals; one of them is to teach this beautiful art in our workshop that gives us the opportunity to teach and share. And it's how we learn more.

“NOVICA has given us a sales channel that allows us to export our pieces to any part of the world, allowing us to concentrate on the quality and inspiration we give each piece. This has led us to hire family members for wood carving.

“We also have copal tree plantations, which have allowed us to preserve this beautiful tree that has given us so much, and that was facing the possibility of extinction.”

"We are best friends as well as husband and wife. Together, we carve Oaxaca's traditional alebrijes, fanciful and fantastical creatures and images crafted from found wood and painted by hand in bright colors. We project creativity, innovation and quality through our work. We believe it's important to be kind, honest and responsible when working, and we seek to improve our efforts day by day.

"Crafts are a pillar for the economy of many families in our community. These workshops are made up of grandparents, parents and their children. In our case, this craft have been handed down from generation to generation. Our parents and uncles taught us and we are now teaching our children so that this art doesn't die out.

"Striking out on our own has been a bit difficult because we've just started from the ground up. Our desire to get ahead has motivated us to improve our alebrijes and we feel that competition is good.

"To learn this craft, you need to be very dedicated and patient. Our greatest challenging is innovating to create new designs. Our inspiration comes from everything that surrounds us, like nature and those moments in life that can express a feeling.

"We use natural branches of copal wood but sometimes work in willow, cedar and zompantle. I shape the creatures and images. We treat the wood and, when a piece contains imperfections, we make a sawdust paste to fill in the gaps. I do the carving, treat the wood and polish it. Lucy creates the designs and paints the motifs.

"What we enjoy the most is how real and mythical animal shapes can emerge from a simple branch. They can be so colorful and original that they appear to have had a life on another planet. It's wonderful to see so many people appreciating a finished piece and to observe joy and surprise on their faces. This is very satisfying for us.

"We'd like for our workshop to grow little by little and be able to offer jobs to other families in our community. We want our work to be seen in other countries so that everyone can be aware of the art in our town."