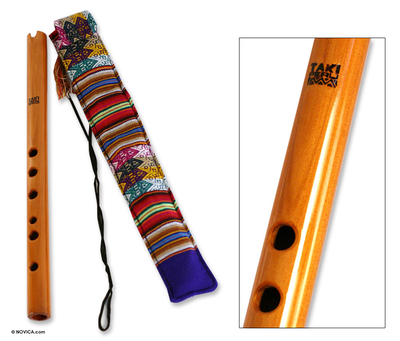 The sweet melody of the quena flute evokes images of tranquil Andean highlands. Quena means "many-holed object" in the Quechua language and it is said to have entranced birds to soar above the person playing it. This may be no wonder, given that early versions the quena were crafted from condor bone. Dionisio Quilla crafts this piece from diablo fuerte, or yellow wood and engraves it with the name taki, which in Quechua means "song."

The quena arrives with a colorful carrying case.

"A Beautiful Work of Music and of Art"

This quena is a real work of art. Im happy that I now have it in my home. I havent figured out how to play it, but there are directions. I will figure it out!

Quality of this flute and case is awesome. The expert packaging protected this instrument perfectly.

Now I am studying how to make sound.

You can find our wood quena flute 'Andean Song' by Dionisio Quilla in musical instruments categories such as Beach Bonfire Wind Instruments and Wood Wind Instruments. Enjoy exploring these sections for other Novica treasures.

"Thanks to my hard work and my great customers, my children are able to get a higher education. Three of them want to follow their own career, while the other three want to help me."

Dionisio Quilla was born in Peru's Puno province on October 3, 1942. He handcrafts most traditional Peruvian musical instruments, including percussion such as bombos, drums and tinyas,; string instruments such as charangos and wind instruments like quena and zampoña. Quilla uses wood and bamboo canes, nylon strings and colorful cotton threads to imbue each instrument with a Cuzco flair.

When he was eight years old, Quilla begin to learn his craft from his father, and started making instruments just for fun. Gradually, his technique began to improve and Quilla became more involved in the elaboration process. As a teenager, Quilla accompanied his father to sell their instruments to stores and fairs around Cuzco, Ayacucho and Lima.

Quilla describes his work as a way of life, a special motivation, and an activity that has enabled him to provide for his family as well as an education for his six children. Now, four of his children are studying for a university degree and two are studying technical courses.

"Thanks to my hard work and my great customers, my children are able to get a higher education," says a proud Quilla. "Three of them want to follow their own career, while the other three want to help me."

"To Novica clients I wish to tell them that with my musical instruments you can play Andean and folkloric music, play the music from my land."
View all