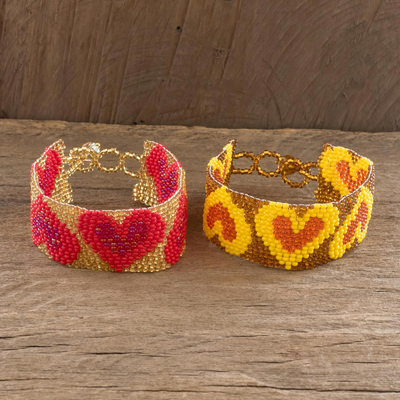 Using small looms, the Artisans of Panabaj create these pretty beaded wristband bracelets in gold, red, orange and yellow. The two friendship bracelets are crafted of tiny glass beads that form heart patterns on the wide wristbands. Crystal beads serve as button clasps that can be fastened at one of three lengths.

You can find our beaded wristband friendship bracelets 'Hearts in a Row' (pair) by Artisans of Panabaj in jewelry categories such as Heart Bracelets, Glass Bead Bracelets, Bead Bracelets, Wristband Bracelets and Beaded Bracelets. Enjoy exploring these sections for other Novica treasures.

The Artisans of Panabaj is a community development organization located in the community of Panabaj, a canton of 3,000 inhabitants with many traditions and much culture in Santiago Atitlán, Guatemala.

The community has suffered many tragedies throughout its history. In the years 1980 to 1990, Panabaj suffered from the armed conflict in Guatemala, when soldiers occupied the community. In 1990, the people of Santiago Atitlán reclaimed their rights from the soldiers. The result was the murder of 13 people in Panabaj. Our organization emerged after Storm Stan, a storm that caused floods and landslides in 2005. Around 900 families lost their homes and approximately 200 people died. Some families had to move to a new community called Chukmuk.

In our organization we continue to support the communities of Panabaj, Tzanchaj, Santiago Atitlán, and Chukmuk through our education and economic development programs. We focus on the empowerment of indigenous women in the rural areas of Santiago Atitlán, providing women with stable sources of economic income through the sale of handicrafts such as beaded jewelry made on special looms. We also encourage them to have a greater impact on their social, family, political, religious and natural environments.
View all