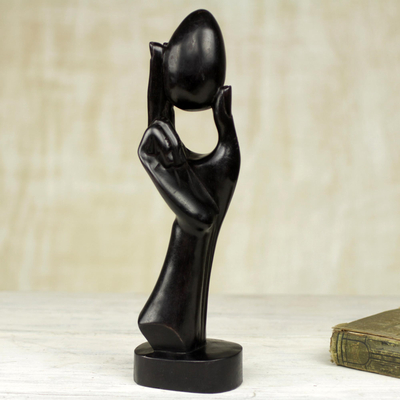 Hand Carved Wooden Sculpture of Hand Holding Egg, "Authority is Like an Egg"

(28)
Perched gently yet firmly within the fingers, this egg can by symbolic of many... more

Perched gently yet firmly within the fingers, this egg can by symbolic of many different things. The Ghanaian artist George Obeng carves this sculpture with a powerful African proverb in mind, however, likening authority to an egg because if held too tightly, the egg will shatter. Conversely, if the egg is held too loosely between the fingers, it will slip and fall. The sculpture is hand carved and finished with a strikingly dark shade of acrylic paint and mansion polish.

Bought for my grandson-in-law who is involved with chickens and eggs. The piece is perfect for his office desk and I was very impressed by the quality of the carving and beauty of the wood. Thank you for an unusual and appreciated piece!

Authority is Like an Egg, Hand Carved Wooden Sculpture of Hand Holding Egg

I would have thought that the detail on an item of this value would have been there. The items in the basket by just scoring diagonally not individually carved as pictured.The walking child faces outward at the side of the mother not facing forward in motion with her as pictured which impacts how the piece is presented. One of the mothers ears is made by a relatively deep hole. It feels as though this piece was rushed.

The exquisite detail is so Beautiful and the mahogany has a high polish. I have it displayed on a dark wood base which really complements it as it is displayed under a floor lamp in a corner of my dining room. I have several pieces of sculpture by Mr. Obeng and I Love them all but this one is my favorite.

I ordered his Divine Birth In Africa nativity set first and was so amazed at the exquisite detail. Then I ordered the Bambara Antelopes and again was in love with his beautiful carvings. I also ordered Collecting Water, a sculpture in ebony and a table, I Fear Only God. I am so grateful to him for creating such exquisite art at such an affordable price for my enjoyment. Thank you Mr. Obeng.

"Elegant depiction of a working woman"

This statue is beautifully detailed. Graceful lines and textures are evident. Unique design with the child and baby along with the woman.

I gave this to a friend , who is geathering African art . He loves the teak sculpture ! I told him about NOVICA site and he wants more ! So I will also be adding to my collection and telling about this site .

You can find our wood sculpture 'Authority is Like an Egg' by George Obeng in sculpture categories such as Ghanaian Sculpture and Wood Sculpture. Enjoy exploring these sections for other Novica treasures.

Through NOVICA sales, George has been able to pay for his children's education and watch them grow up to become successful in their careers. Although he no longer needs to support his children, he still provides for his granddaughter and his wife. Every order makes an impact on Georges' life because it helps him care for his sweetheart as she recovers from her stroke.

George creates all of his works with the mission to preserve, promote, and develop. His desire to preserve can be seen through the locally sourced wood he uses and his apprenticeships where he teaches traditional techniques and assist carvers in learning new skills. He promotes and develops his designs through his incorporation of ancient symbols and storytelling into more modern carvings. He hopes his success and designs encourage future generations to practice carving and learn about their ancestors.

George was one of NOVICA's first artists in West Africa. Although a sustainable income is important to George, his main goal is to share his gift with the world. He sees the sales as a form of appreciation to this gift. In George's view, the appreciation from his art has been growing every year as he sells more and more of his African wood carvings.

In 1981, George's wife had two ectopic pregnancies. They survived financially with the help of George's income from NOVICA and were able to recover as a couple and a family. In 2018, George's wife suffered from a stroke and now the couple is using his NOVICA income to cover her medical bills as she recovers.

George has trained several people who are now able to support themselves and their families. George also hired two of his former apprentices to be his associates to enable him keep up with the volume of his orders.

George Obeng has received 3 microcredit loans with 0% interest from Kiva and Novica, the first for $1000 and the most recent for $1000. Proceeds were used to purchase new tools and equipment for his workshop.

George has received the "Sculpture of the Year" award from Leisure Arts and Entertainment and received 2nd and 3rd place in the National Arts Contest.

George's work was featured in the newspaper Spectator on April 12, 1986.

The artist is motivated to carve by one principal theme: "Recording the events" of his time.

George Obeng was born on March 30, 1952. His carvings are realized primarily in ebony wood, as the material is endowed with innate strength and beauty that requires no chemical enhancement. Mahogany, odum (oak), sese, and odanta are other woods he employs, although these need to be treated for preservation. Obeng prefers to leave his ebony carvings unpolished, he says, "Because the beauty and natural sheen of the wood in nature is left on perpetual display."

The artist is motivated to carve by one principal theme: "Recording the events" of his time. As an animal rights activist and a committed vegetarian, wildlife plays an integral role in his work, such as the tenderness of the butterfly, the mischief of the monkey, the slowness of the snail, and the vivacious character of the bird. Each of his carvings is a poignant reminder of this critical juncture in the preservation of the global environment and communal ecology.

Themes of the "Third World" also inspire Obeng's art. Depictions of female figures, often carrying children and heavy baskets simultaneously; comments on the cyclical problem of social confusion and irresolution, which extend into the endemic nature of inadequate and/or nonexistent development of facilities like health care, education, food, security. He is an observer of his time, struggling to represent the myriad unheard voices that surround him.

But for his stalwart determination, Obeng would not be the carver he is today. He had been ordered by an elder relative to take up typesetting and printing, and from 1967 to 1970 he was apprenticed to a master printer, having completed Middle School Education with a certificate in 1967. However, he defied his family and undertook part time studies in sculpture from 1970 to 71. Between 1972 and 1974 he took a course in sculpture at the School of Art and then a proficiency course in sculpture at the university College of Art. He worked as Assistant Cultural Officer with the Arts Council of Ghana while practicing painting between 1971 and 1986. Obeng was responsible for exhibitions, restorations, commission, and training workshops for carvers. As an apprentice for Saka Acquaye, a renowned sculptor, he was able to participate in exhibitions in Ghana, Oakland, Britain, Bulgaria, Romania, and China, along with many other African countries.

Since 1986, Obeng runs a workshop where he constantly trains apprentices; he also offers assistance to carvers. His works are displayed in the Official Residence of the Ghana High Commissioner to Nigeria; in Barclays Bank, Ghana Ltd., Africa Films Ltd., and the Arts Council of Ghana, Accra. His awards include second and third prizes in Sculpture, National Arts Contest 1979 and Sculptor of the Year from Leisure Arts and Entertainment, 1988.

He is currently married to his sweetheart with whom he has four wonderful children.
View all