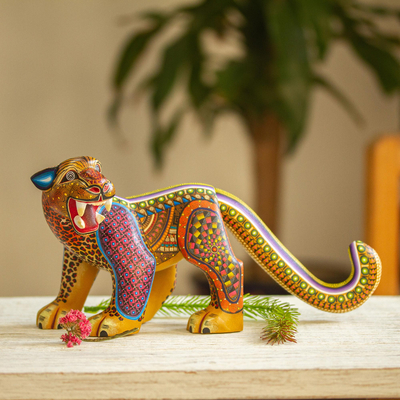 Incredibly detailed, a yellow jaguar bares fierce fangs. Manuel Cruz crafts a stellar example of Mexico's alebrije art. The image is carved by hand of copal wood in the style of Oaxaca and meticulously painted by hand with tiny brushes. The finer details are created using a maguey thorn instead of a brush. Small parts are separated for shipping to protect from breakage.

The alebrije tradition originated with Mexico City artisan Pedro Linares (1906-1992). When he was 30, he became ill and fell into a coma. While he was unconscious, he dreamed he was caught between the land of the living and the dead, a place populated with creatures whose body parts belonged to different animals. The beings repeatedly cried, "Alebrije!" When he was well, Linares recreated these fanciful figures in papier mache. His work became famous and inspired artisans in the state of Oaxaca, who began crafting alebrijes of wood.

The wood branch dictates the final form, thus size and shape can vary slightly. Thus, each alebrije is an authentic work of Mexican folk art.

Truly beautiful alebrije jaguar created by hours of painstaking work. The colors (and their relationship to each other) are gorgeous.

The Howling Coyote did not disappoint. The creativity and craftsmanship that went into this piece is remarkable. We love it!

“My name is Manuel Cruz; I was born in San Agustín de las Juntas, in the state of Oaxaca. Since I was very young I received from my parents a beautiful teaching that to this day accompanies me faithfully every day--the art of alebrijes.

“I can't remember a single day when I didn't help my parents paint the pieces; it was precisely how I learned to love this art and its details. I was ten years old when I painted my first alebrije. I remember how my parents expressed their passion and charm from day to day when creating these beautiful pieces. They told me what their origin and their legends were.

“Alebrijes were first created by Pedro Linares, who, while in a coma, saw these magical creatures that showed him the way back. This story that seems fantasy inspired me to create a magical touch in the decorations of my pieces.

“My inspiration itself is my life, as each piece has a meaning and a mission. Each piece has a degree of commitment and difficulty that is revealed in its decoration and in its forms. Not to mention a part of me and my family.

“Starting this adventure has required a lot of focus and commitment that comes when you love what you do. That has also allowed me to share my experience with those who want to learn from the heart and dedication. I want each of my pieces to transmit the magic of Mexican traditions, as well as the dedication of my family.”