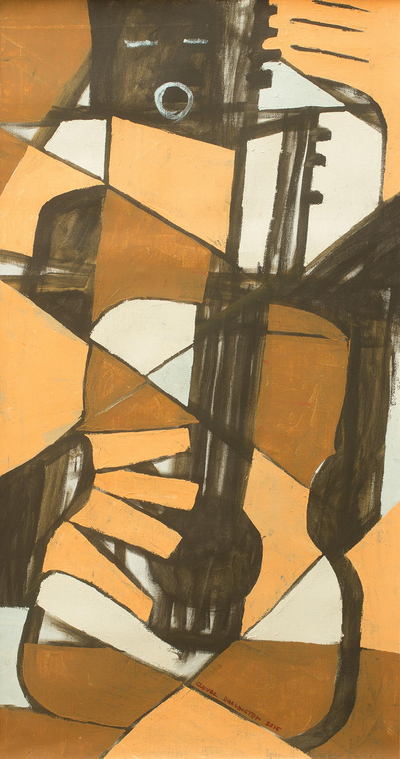 Music and musicians are a favorite theme of Glover Darlington. Working in cubist style, the talented Ghanaian artist depicts hands strumming the strings of a guitar. The color closures are outlined in black and the artist selects a warm palette of orange, brown and beige.

You can find our 'strings and Harmonies' by Glover Darlington in paintings categories such as Dance and Music Paintings, People and Portraits Paintings, Cubist Paintings, Acrylic Paintings and Oil Paintings. Enjoy exploring these sections for other Novica treasures.

"I use bright colors as a matter of special interest."

Born on June 13, 1965, Glover Darlington schooled at both the Labone and Saint Thomas Aquinas Secondary Schools of Accra, graduating with academic success in 1985. When he went to university at the Kwame Nkrumah Univerity of Science and Technology in Kumasi, (KNUST), Glover studied art, his all-time love, for his bachelor's degree. He raised this hallmark to a higher level by undertaking a post-graduate degree program in education at the University of Capa Coast. Later on, when he had offered his National Service, he undertook teaching - which he continues to do up to this date.

Serious painting converged in Glover's life when, in the course of his work at KNUST, he had to work on his own to support his very life and education. His works made their mark and sold through reputable galleries. With increasing creativity and appeal for his works, Glover set up his own Brush Strokes Art Gallery, which exhibits his works.

He works mainly in oils because they offer him a better material to apply on canvas in the direction of attaining the closest realization of his dreams and artistic expression. In other words, oils capture the ethereal imageries of his visions with maximized satisfaction. He occasionally paints with acrylics for these too make him realize his visions with a better resolution than watercolors, without really sacrificing watercolor visual effects. Of his choice of colors, Glover says:

"I use bright colors as a matter of special interest."

Glover has, and is still participating in art exhibitions. His paintings usually depict the life of the Ghanaian in different settings.
View all