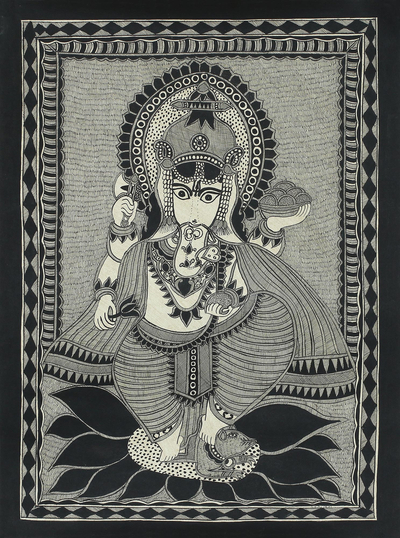 (9)
Ganesha, the beloved god with the head of an elephant, sits on a lotus throne... more

Ganesha, the beloved god with the head of an elephant, sits on a lotus throne with a mouse resting at his feet. A halo represents enlightenment as he feasts on his favorite dessert. Ganesha is the son of Shiva and Durga, two of the most powerful deities in Hindu belief. Ganesha is endowed with the power to keep control of occult forces that bring disaster upon humankind. Devendra Kumar Jha portrays him the ancient Madhubani style, drawing the intricate images freehand on handmade paper. Originating in northern Bihar, India, Madhubani painting was once used to decorate the floors and walls of homes. Life in harmony with nature is a popular theme for this art style.

As each painting is an individual creation, each is unique. Colors and motifs may vary slightly from that pictured.

Beautiful painting, got very well packed. Thank you so much for beautiful work

The size is small

"What a beautiful piece of art!"

Just amazing the colours and has framed up beautifully. I love it . Reminds me of my holiday to India.

"A lovely work of art"

This lovely piece of art is a delightful and fun addition to our home----love the detail and the general overall feel of lightheartedness is portrayed so well...cant help but smile every time I look at it.

entry to a home a doctor's or dentist's office endless possibilities

Tree of Life with Birds, Multicolored Madhubani Painting of a Tree with Birds

This artwork caught my eye as I searched for a wallhanging with an Asian influence that would fit well in a California Arts and Crafts home. The vivid colors, creative geometric design and excellent handmade quality are perfect. I would recommend anything produced by this highly talented family.

You can find our madhubani painting 'Ganesha’s Feast' by Devendra Kumar Jha and Family in paintings categories such as Hinduism Paintings, Folk Art Paintings, Madhubani Paintings and Other Paintings. Enjoy exploring these sections for other Novica treasures.

My mother, who is a state award winner in Madhubani, the painting style that I use, was my mentor."

Join us in congratulating to Devendra and Family for receiving the State Award for Excellence for their Madhubani paintings! This award is conveyed by the Government of Bihar for year 2012-2013. Along with the State Award, he has also received the National Award for his Madhubani painting in the year 2013 conveyed by the president on behalf of the Government of India.

"I was born in 1969 in Jitwarpur, Bihar - an eastern state in India. My mother, who is a state award winner in Madhubani, the painting style that I use, was my mentor. Under her supervision and guidance I have emerged as an artist capable of creating these paintings.

"In this school of art we do not make preliminary sketches, nor is our work planned. We simply pick up our brushes and create. A vivid and creative imagination is essential in this style of art, for while motifs may be similar, no two paintings will ever be found to be the same."

Mithila, (in Bihar) is a scholastic and cultural center in India that traces its lineage of arts from epic times. Mithila paintings – alternately called Madhubani paintings – are a folk tradition kept alive by women in northern Bihar. They depict events from epic, mythology and traditional designs on their floors and walls of their houses using crushed wet rice and natural colors. From this age old tradition stemmed the practice of drawing Mithila paintings on a canvas of hand-made paper or pure mulberry silk fabric using natural colors and fabric dyes. Brushes, sharpened reeds and pen nibs are used.
View all