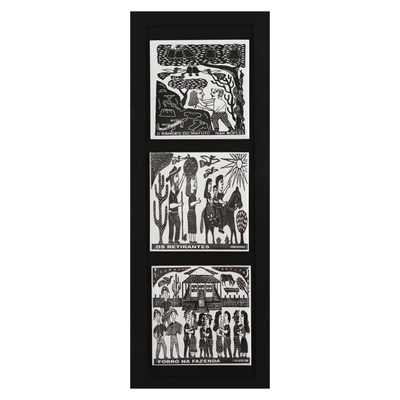 Black and white woodcut prints depict vignettes of life in Northeastern Brazil. The first, 'Country Courtship,' depicts a couple dallying in a hidden countryside bower in the shade of a cashew tree. Birds serenade them and a lizard watches curiously. Suggesting the Garden of Eden, a serpent slithers up the tree trunk.

The second, 'The Migrants,' shows a family of farm workers on their way to the next job. Carrying his hoe, the father steadies the bundle of belongings his wife balances on her head. Three children catch a ride on the family's horse beneath the tropical sun.

'Dance on the Farm,' the third print, depicts couples dancing to the music of a trio on a weekend in rural Brazil.

Ivan Borges, transfers the images to white ceramic tiles and frames all three in a single composition.

This tile reminds me of my deep sea fishing trips and evokes a smile and pleasant memories whenever I look at it.

You can find our ceramic tiles 'Life in the Northeast' by Ivan Borges in wall decor categories such as People and Portraits Wall Art, Landscape Wall Art, Ceramic Wall Art and Wood Wall Art. Enjoy exploring these sections for other Novica treasures.

"Despite the recognition of my works, it hasn't been easy to live and raise my family only from my art. But this is what I like to do."

Ivan Borges was born among prints and grew up amid them. His father is J. Borges, a renowned woodcut artist whose works are widely recognized. With his father, Ivan has traveled to exhibit and teach his art in workshops in Europe and in the United States, and the young man continues traveling on his own to show his works abroad and to sell them all over Brazil.

"I was born in 1978 in Bezerros, a small city of the State of Pernambuco," Ivan says. "Since the age of ten, I have helped my father in his atelier but, at the age of fifteen, my life turned upside down. My girlfriend got pregnant. We were too young and, for a year, each of us stayed in our parents' homes. At seventeen, we decided to go to São Paulo with our baby boy and have our own home. We lived there for two years. I have worked as a gardener, wall painter and bricklayer assistant. Upon returning to my small hometown, I again went to work with my father. I was creating my own woodcuts and, when I was twenty, I decided to have my own workshop.

"I was father and grandfather very early. I have two sons and a daughter who gave me a grandchild. Despite the recognition of my works, it hasn't been easy to live and raise my family only from my art. But this is what I like to do and I feel fully satisfied."
View all