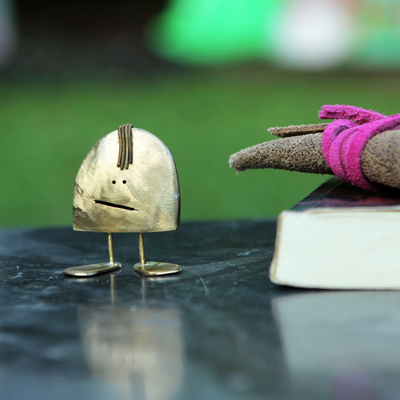 From Ruby Yallouz' original "Metta Toy Art" collection of miniature brass figurines, the character of Ilse is inspired by the character Ilsa Lund played by Ingrid Bergman in Casablanca. "This character is a tribute to my mother, who loved Ingrid," explains the Brazilian artist. Ilse is Swedish and comes from the third dimension of human consciousness, but as a woman she is more sensitive and has a vision. She is a beautiful but troubled woman who fell in love with Rick because she thought her husband had died in the war, then discovered that he was alive.

"These Metta Toys are the first thing I worked on after recovering from brain surgery. I had never done anything like them. Above all, these new creations, my creatures, have brought me immense happiness. With them I smile again and I've had fun with them, even though the message they bring is a serious one. The Metta Toys were born to bring happiness and laughter to our lives, which is why I’d like to share them with the world, especially where a smile is needed," confides Yallouz of her sculpted figurines. "After all, we all smile in the same language."

Yallouz is inspired by Vipassana meditation, as well as Barbara Hand Clow's Pleiadian dimensions of consciousness.

This sculpture brings a smile to my face every time I look at it. Absolutely love it! Kudos to this great artist!

I liked Zoouy and Daniel so much that I had to add Juan!

Zoouy is special. She is full of light and always brings a smile. So cute that I purchased 2 more of her siblings.

I'm very happy with this little sculpture. He sits by my bed to remind me of the good in life and help me get an early start to each day. Thank you for this wonderful addition to my home.

You can find our brass figurine 'Metta Toy Art Ilse' by Ruby Yallouz in sculpture categories such as Modern Sculpture and Brass Sculpture. Enjoy exploring these sections for other Novica treasures.

Ruby Yallouz has received a $400 microcredit loan with 0% interest.

"Something mysterious occurs when I'm creating. There's a kind of energy (...) it's the pleasure of creation."

"My fascination with metals began when I was 14 years old, when a friend of mine invited me to join a course in jewelry design. It wasn't until I was studying architecture that I was able to make my dream come true: I was so excited I invested everything I had in materials and tools.

"When I was a student of Architecture and Urbanism, in the beginning of the 1980s, the atmosphere was very optimistic. I studied hard in order to be able to design different pieces. I worked as an architect for some time – in fact I received awards for some of my projects. Yet I decided to leave it all and dedicate myself exclusively to jewelry.

"Everything was running smoothly until the economic crisis that accompanied the early 1990s. I had to diversify and began to create different types of jewelry and other items. By 2001 I was able to consolidate everything: architecture, design, jewelry and other items. Whether it is a piece of jewelry or a vase, I manipulate metal – a prime material filled with many shapes and color possibilities.

"Something mysterious occurs when I'm creating. There's a kind of energy that fuses with the work and everybody else feels it too. This effect has nothing to do with the material itself – it's the pleasure of creation. My work is distinguished for its originality and artistic value, which has opened the doors of many important galleries in Brazil, as well as in Spain and Portugal."