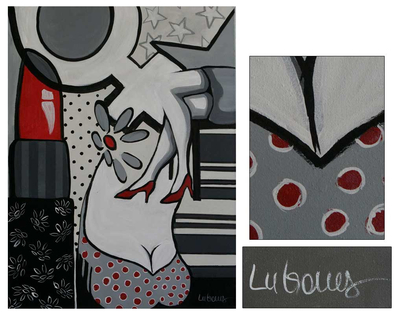 (1)
By Brazil's Lu Gomes, this singular work depicts elements from the feminine... more

By Brazil's Lu Gomes, this singular work depicts elements from the feminine world in a cheery, modern language. A symbol for female, stars, a floral print and a revealing swimsuit in shades of black and gray vie for attention with red high heels and lipstick.

This was a piece I have been looking for a long long time. When it arrived I was blown away. It looked amazing on the site but even more impressive when I opened the carefully wrapped parcel. Thank you Novica for making it happen

You can find our 'feminine' by Lu Gomes in paintings categories such as Artistic Nudes Paintings, Still Life Paintings, Expressionist Paintings and Acrylic Paintings. Enjoy exploring these sections for other Novica treasures.

"First I studied the technique – it defined the colors that I wanted to use and I thought about things that I wouldn't like to paint. Only then did my art began to take on my face…."

"I always observed my mother painting. I felt such curiosity, and wanted to pick up a brush and paint. I wanted to begin to see the forms that I saw in the world appear on the canvas. But my mother didn't allow me in her studio. One day she left and I quickly decided to slip inside. I took a canvas, I stretched it and began to paint colors on the white surface. It was sensational!

"My mother and my father [Rogério and Ana Martins – Novica-featured artists] returned and they began asking me about what happened. My father, with his keen eye for art, saw my self-confidence and agreed to let me begin painting. At the time, I was 15 years old. I began to study painting and other techniques. I had a lot of my mother's influence, but I didn't want to follow in her footsteps, because I was seeking my own identity in painting.

"Once, while observing a sculpture in a public square, I was attracted by its modern lines. I went home to try to produce something similar to what I had seen. I adored it! I then started to research forms and people to try to extract their anonymous modern lines. First I studied the technique – it defined the colors that I wanted to use and I thought about things that I wouldn't like to paint. Only then did my art began to take on my face, my ideas and ideals. I tried to express feeling, movement and depth in paintings that resemble sculptures. That discovery in the world of art is one of the greatest emotions I have felt in my life."