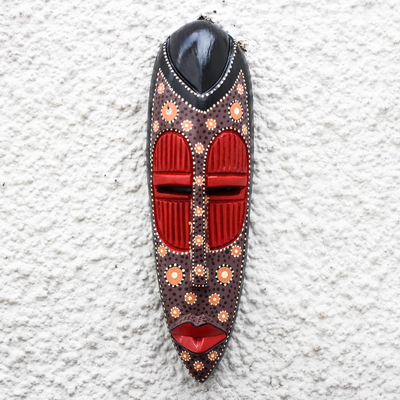 Inspired by the Ga people of Ghana, K. Baka creates this beautiful African mask. He hand-carves this mask from a single piece of sese wood, which is painted by hand with various dot motifs. The eyes and lips are accented in red.

Have several African masks, this has a beautiful color.

Interesting piece. At first glance one sees only a a good design before focusing in on depictions of mother and daughter with moon and house. Lovely colors, Placed in light gray room with fountain. Serene. K Diaz

Love these coasters! Each hand painted and not too big. I ordered them for me, but I will also be purchasing them for a friend for her birthday!

Nice have as a gift.

Even the childs mask can be worn by an adult; they are very adjustable.

My son & grand son thought they were great. They already look exactly alike, so this was just an extension. They came quickly & are very well made

You can find our african wood mask 'Ga Dots' by K. Baka in masks categories such as Ghanaian Masks and Wood Masks. Enjoy exploring these sections for other Novica treasures.

"Since working with you, the years have been full of good opportunities.

"Aside from seeing a change in my sales, I have also seen a change in the way I do things and in my level of creativity. I have made a lot of progress in the way I work, and have achieved a lot of success in terms of making my dreams and visions come true. I used to face challenges like expanding my works and sales but, thanks to you, those challenges have been reduced drastically.

"I don't work in the same place anymore. I used to have a wooden shop but now have moved to a nice rented gallery. I have been able to expand in scale, in terms of my sales and personal finances. Currently, I still train others.

"You have improved both my life and that of my family. There was a time that I was in the hospital and, just as I was thinking of how to pay the rest of the bills, I had a call that a cheque was ready for me — wow! In fact, I became so excited that I even forgot about being ill for a moment. By the grace of God, that saved the day. I am and will always be grateful to you."

"When I was a child, I used to draw a lot. I was so interested in art that in school it was the subject I got the highest marks for. Actually, it was a gift — a talent. I later entered art college for a three year diploma in art. After graduation, I established my studio at home. While in school, I was painting and selling so, after school, l I did not need to undergo any brush-up or polishing. I do paintings, craftwork, billboards, screen-printing and signboards. In 1997, I had 20 students to whom I taught painting, batik, and textile making. Also, many art students come to me for brushing up or polishing. Presently I have two apprentices.

"My paintings are natural, and I try to use inexpensive but high-quality material like calico, denim, military camp tents, and heavy curtain cloths. I find they are stronger than canvas. This also makes it possible to reach a larger audience. I use acrylic paint because it dries faster and lasts longer. I use phone cards for the painting instead of brushes because this gives me the effect I want. For my paintings, many a time I see them in dreams and visions before I actually paint them. So in the morning, I organize my materials and start painting.