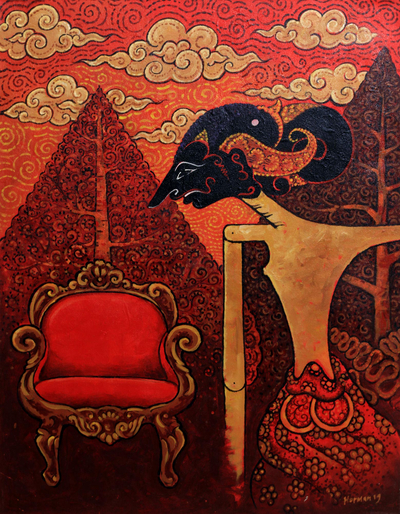 byHarman
Depicted as a traditional Indonesian shadow puppet, a king without a crown is... more

Depicted as a traditional Indonesian shadow puppet, a king without a crown is depicted alongside a regal chair against a background of stylized trees and clouds in hues of red and orange. Javanese artist Harman paints this surrealist composition that draws influence from Indonesian folk art. Says the artist, "A king without a crown is a picture of a great leader with a heart to serve his people. A king who lives like ordinary people as if he is not the king and puts aside all glamorous things."

You can find our 'king Without Crown' by Harman in paintings categories such as Cultural Paintings, Landscape Paintings, Folk Art Paintings, Surrealist Paintings and Acrylic Paintings. Enjoy exploring these sections for other Novica treasures.

"In 1988 I moved to Bali, known as the center of the world of art. Balinese social life and culture inspire me greatly."

"My name is Harman and I was born in Java on May 2, 1971. Since I was a child I loved art very much. I had a dream of becoming a professional painter so I tried hard to learn painting. I studied at SMSR Yogyakarta in 1987-1991; at ISI (Indonesian School of Art) I took the program of Interior Design until I graduated in 1996. Besides learning painting in a formal way, I also studied with a senior painter, Dulah.

"Many people, including my family, considered that painting is not a good profession, relating to economic aspect. But I have faith in my way of life and will exist and be consistent in making paintings. I have received second prize in the Universal Painting competition in Yoyga, Central Java in 1989; second place in creating political caricature at IAIN Yogya, Central Java in 1990; and a third place prize in sketching gravity at Gramedia Jakarta in 1997. In 1988 I moved to Bali, known as the center of the world of art. Balinese social life and culture inspire me greatly.