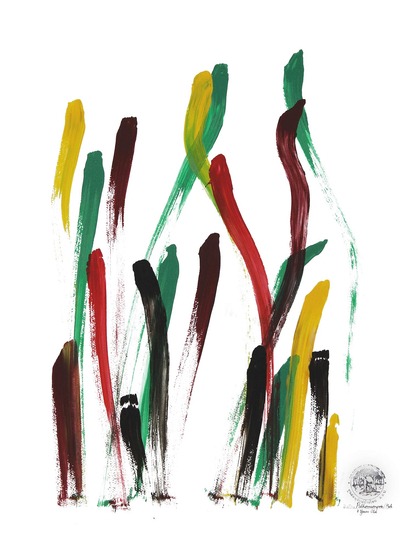 Contemporary Abstract Painting by a Thai Elephant Artist, "Be Fresh"

byPathomsompob
This fresh and modern image is painted by Pathomsompob, an Asian elephant and... more

This fresh and modern image is painted by Pathomsompob, an Asian elephant and talented Thai artist. Using a palette of bold primary hues, he demonstrates a dynamic freedom of line and color.

Please note: The elephants hold the paintbrush carefully, by the tip of their trunk – which is also the elephants' delicate nose area. Slight smudging, and an occasional water droplet, here and there, are to be expected on most elephant paintings. We like to consider that these imperfections add to the conversation value of each piece.

You can find our elephant painting 'Be Fresh' by Pathomsompob in paintings categories such as Abstract Paintings, Elephant Art Paintings and Acrylic Paint Paintings. Enjoy exploring these sections for other Novica treasures.

Pathomsompob is the first elephant in Asia to be to be conceived through artificial insemination.

In October of 2009, Thailand's H.M. King Bhumibol Adulyadej named this handsome elephant Phlai Pathomsompob, after the brave general of the same name. Previously known as A.I. due to his origin, Pathomsompob was born March 7, 2007. Pathomsompob is the first elephant in Asia to be to be conceived through artificial insemination.

Worried about the decline in the elephant population, veterinarians at the Thai Elephant Conservation Center (TECC) took to the task of artificial insemination with the collaboration of the Veterinary Medicine faculties at both Kasetsart and Chiang Mai Universities, as well as with sponsorship from several NGOs. Their mission is to facilitate elephant breeding in a natural environment.

Pathomsompob's father is Japatee, and his mother is Phung-kod. The medical staff at TECC kept a close watch and selected Thantawan, a female elephant, to protect the newborn Pathomsompob from his mother. In the wild, mother elephants at first reject their offspring and may attack them in case of a painful birth, so another female instinctively steps in to protect the calf. Another elephant and Novica featured elephant artist, Phumphuang was called upon as a wet nurse since her own two-year old calf, Aleena (also Novica featured artist), had been recently weaned.

Pathomsompob is a healthy elephant, however he does expect his bananas to be peeled and he will spit out the bagasse out whenever eating sugar canes. He is generally an enthusiastic and wise pachyderm, but he can be stubborn, weep easily and sniffle. Pathomsompob’s artistic talents include painting and playing the angklung - a traditional Thai instrument crafted with bamboo.