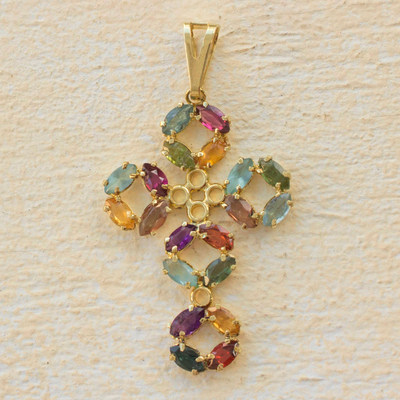 (3)
This colorful and sparkling cross pendant is made of yellow, green, blue, lilac... more

This colorful and sparkling cross pendant is made of yellow, green, blue, lilac and red marquise-cut cubic zirconia set in 18k gold plated brass. This lovely pendant is handcrafted by members of the Jewelry of Minas Gerais of Brazil.

My daughter had lost her baptismal cross from her youth and I ordered her this beautiful, colorful gemstone creation, which she LOVES and can pair with almost any outfit / color combination!

Beautiful and colorful, this works with both traditional and modern looks! Very talented designer!

You can find our gold plated cross pendant 'Glory on High' by Jewelry of Minas Gerais in jewelry categories such as Cross Pendants, Birthstone Pendants, Cubic Zirconia Pendants, Brass Pendants and Gold Pendants. Enjoy exploring these sections for other Novica treasures.

It is in the cities of Minas Gerais where some of Brazil's first notable artists flourished....

Jewelry accessories are one of the greatest artistic expressions of humankind. They can symbolize cultures and specific epochs, and Brazilian jewelry is linked both to European styles and indigenous themes.

Minas Gerais is a Brazilian state known since colonial times for its abundance of gold and precious stones, especially in its riverbeds and subsoil. A great part of the economic and social development of the region is owed to its mineral richness. Its name in Portuguese translates literally as "General Mines."

It is in the cities of Minas Gerais where some of Brazil's first notable artists flourished, such as sculptors and painters of Baroque churches. Despite the great potential of the region, goldsmith and stonework were prohibited during colonial times, and artists worked clandestinely up until the mid-nineteenth century.