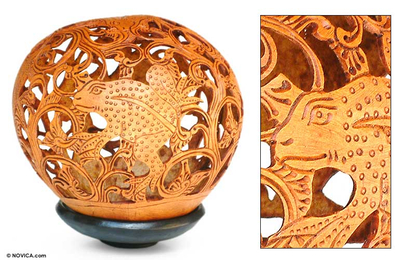 (20)
Putra Suteja carves the realistic image of a frog as it stands on sinewy vines.... more

Putra Suteja carves the realistic image of a frog as it stands on sinewy vines. Frogs are regarded as talismans of good luck, and Suteja carves its image by hand from a coconut shell. Expertly detailed, the sculpture stands on an albesia wood base.

Please note size and coloring may differ as the artist works with natural coconut shell.

This product is exactly as described, looks great, and seems very sturdy. I bought it for my mother and shes looking forward to setting it up in the spring and hopefully attracting some birds!

My mother-in-law loved it!

This looks lovely in our home. Absolutely beautiful attention to detail so many little things you notice. We use this with battery powered tea lights sometimes for extra ambiance and it cast beautiful shadows

An extraordinary lovely piece of work. Quite lovely and could not be more thrilled. A lasting souvenir of wonderful Indonesian memories. Mahalo!

Bought this as a gift for a hard-to-buy-for niece. She loves it as do I. Itâ€™s delicate but well made. Since swans mate for life, it is a wonderful wedding gift.

"For those zen moments"

You can find our coconut shell sculpture 'Frog Fortunes' by Putra Suteja in sculpture categories such as Nature Sculpture, Animal Themed Sculpture and Coconut Shell Sculpture. Enjoy exploring these sections for other Novica treasures.

Putra Suteja has received a $300 microcredit loan with 0% interest.

"I don't want to limit my work to certain themes only. Religion, mythology, daily life, and nature are inspirational to me, as well as my own cultural history.”

After a long illness, Putra Suteja passed in November of 2009. True to his happy, stoic character, Suteja kept it to himself and always greeted us with a big, friendly smile. He is survived by his wife Eka, and two small children, then a 2 year old daughter and 19 days'old boy. Our most heartfelt condolences to them and to his sister, Luh Mas Pertamiari, also a Novica featured artisan. Eka wishes to honor Suteja's artistry by continuing his work, and has asked us to keep his name and memory alive through Novica. "Sleep well, our friend, in your peaceful eternal sleep. The lights of peace will erase all your pains. Our prayers be with you."

"I was born in 1975 in Gianyar, where I was given my Balinese name, Made Putra Suteja. Our village has fostered the art of woodcarving for many years. I started to learn the art from my parents while I was still in elementary school. My grandfather was a famous carver in his time, and received several awards for dedicating his life to the art world.

"I don't want to limit my work to certain themes only. Religion, mythology, daily life, and nature are inspirational to me, as well as my own cultural history. I carve with several different materials, including suar, sono, hibiscus, and crocodile woods, as well as coconut shells.

"In 2005, the best year of my life to that date, I married a Balinese woman named Putu Sri Ekawati, and was also introduced to Novica. I enjoy working with Novica because my work reaches people outside of Bali, and I feel respected as an artist. I appreciate the fact that Novica promotes Balinese artists on an international level."
View all