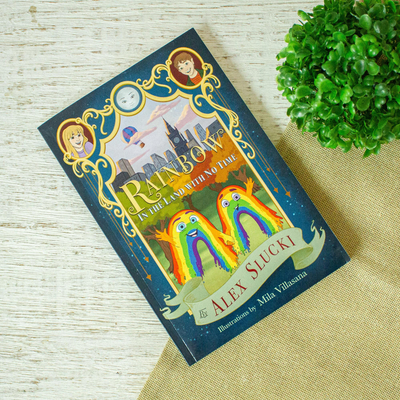 In this second installment of the 'Rainbow' series, author Alex Slucki invites young ones to let their imaginations and their curiosity run wild. He narrates this beautiful tale filled with magical adventures and colorful illustrations in English. An artist, musician, and poet, author Alex Slucki is a dreamer who shares positive messages in his richly illustrated children's books. The first book on his 'Rainbow' series became a best-seller in Amazon shortly after publishing.

“I studied 8 semesters of Latin American Literature at the Ibero-American University, acting at the Dimitrios Sarrás Studio, professional singing with the teacher Ricardo Sánchez, and I have a specialization in Human Behavior from the University of Newport. I published my book Rumbo de Espejos (1991), with Editorial Praxis. I obtained 1st place in the poetry contest of the Universidad Iberoamericana in 1991.

In 1996 he began to transmit individually and in groups the messages of the angelic guides. Through them he published the book ‘Footprints of light: Reflections of Angels’ on the art of being human. He studied the Maharishi technology of Transcendental Meditation; he learned the Universal Energy healing technique, and he is a facilitator of the Holographic Pattern Transformation techniques created by teacher Chloe Faith Wordsworth. He developed his own technique for healing, releasing and integrating non-coherent beliefs based on his visionary experiences in individual therapy, which evolved into what is now called the Integral Transformation System, a school of knowledge for a fulfilling life. Through his work with beings of light, he has also published the book ‘The Game of Remembrance: The Akshmil Sessions’.

“Currently together with Jorge Medina we manage the Heaven-Earth therapeutic system, a comprehensive proposal for the healing of body, emotions, mind and soul. In September 2007 my material book: ‘Revelaciones del Graial’ was published, co-authored with Dr. Malena Carrión (Edit. Alamah). My most recent material, ‘The Color of your Destiny’, was published in April 2008. Together we have traveled with the Sky-Earth project around countries such as: Spain, the United States, Guatemala, Canada and different regions of Mexico. My most recent project is the unification of healing, knowledge and music.”