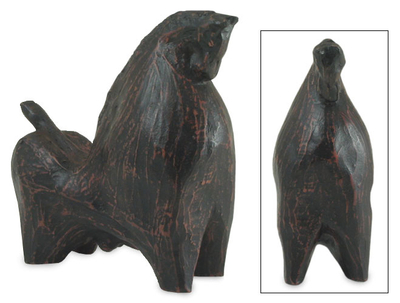 byMario Garcia
Inspiring, this voluptuous horse stands as a symbol of pride and courage. Mario... more

Inspiring, this voluptuous horse stands as a symbol of pride and courage. Mario Garcia sculpts the horse from ceramic, masterfully capturing the admirable beauty of the horse through his particular stylizations. Standing with its chest valiantly forward, this statuette of the legendary equine is one of noble elegance.

You can find our ceramic statuette 'Sphinx Horse' by Mario Garcia in sculpture categories such as Animal Themed Sculpture and Ceramic Sculpture. Enjoy exploring these sections for other Novica treasures.

"In a sensual and virile manner my sculptures represent these two symbols of stability and conquest."

"I entered into contact with ceramics at the age of 10 in Montevideo, Uruguay, where I came together with various artists, especially Armando Gonzales, who is considered the most established sculptor in the city. I studied at the Applied Arts School and participated in the Union of Contemporary Fine Artists of Montevideo in 1972.

"I came to Brazil in 1978 and now I have lived more time here than in my own native land. For 20 years I have been concentrating on animal figures, such as the bull and the horse, which I have known well since my youth living on ranches on the Uruguayan border. I have investigated their forms and simplified them, creating a singular style.

"The horse is elegant; it possesses many curves, it is restless and intimately linked to the story of human civilization. The bull is a symbol of strength and work, essential to the establishment of humankind on the earth. In a sensual and virile manner my sculptures represent these two symbols of stability and conquest.

"Throughout my career I have participated in diverse gallery exhibitions, such as the Mosaic and Fine Arts Galleries, a permanent exhibition in Porto Alegre, Rio Grande do Sul, at the Caixa Cultural Gallery in 1988 in Rio de Janeiro, and I was even selected to participate in the first edition of the international showing '2000 Reasons to Love the Earth,' promoted by the 2000 Foundation of Holland."