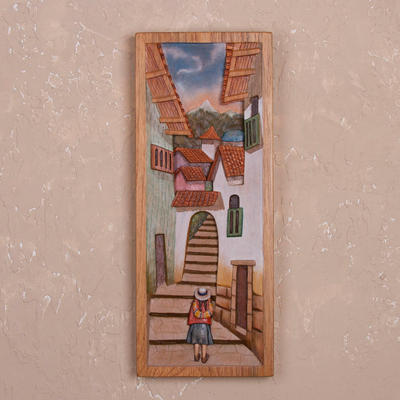 (46)
The marvelous composition of this relief panel is designed by the Montalvo... more

The marvelous composition of this relief panel is designed by the Montalvo Family artisans. They carve the rectangular panel of rich cedar wood, featuring a scene from the city of Cuzco. A lone pedestrian walks up the cobbled steps between homes, framed against the Andean mountains in the distance. A hand-painted finish completes this piece of wall decor.

This peaceful rendition of the tender love of mother and Son will fill your heart with peace and wonder. I like how the baby connects with His sweet mother through a gentle stroke of her face. The way her eyes are fixated on His eyes makes me think she can see beyond time what will become of her little baby. Shes not smiling but shes not crying either. Shes just savoring the moment. The carving is detailed and the colors are just perfect. You wont find something so unique in a regular store.

so beautiful in its simplicity, this wooden carving of Our Lady is amazing! Very, very well packed as well.

"hanging over my bed."

this panel is exquisite, really of the quality I would expect to see in a church! Now, I am blessed to have it in my bedroom bestowing grace and calm!

"So Beautiful and well made!"

This is so worth the money!

We received our crucifix and that day we had it blessed and it hangs above our bed. We had a house fire and lost almost everything. Our bedroom was gone, but the one thing hanging still was this Crucifix. It had minimal smoke damage and was easily cleaned. I was amazed at the quality and we were heartbroken when we thought we had lost this. Weve ordered many religious sculptures from Novica and weve never been disappointed. This is our favorite though

You can find our cedar relief panel 'Street of Steps' by Montalvo Family in wall decor categories such as Cultural Relief Panels and Wood Relief Panels. Enjoy exploring these sections for other Novica treasures.

Montalvo Family has received 5 microcredit loans with 0% interest from Kiva and Novica, the first for $1500 and the most recent for $1000.

"Every piece is an opportunity to express our profound relationship with the Catholic faith."

Brothers Simeón, Javier and Germán Ramírez Montalvo graduated from the San Juan Bosco School of Arts and Crafts, a school for low income students in the central Andes. Taught by Italian Salesian priests of the Mato Grosso congregation, they learned the secrets of woodcarving.

From the time they were small, they worked in carpentry and in molding ceramics, popular activities in their town. In school these skills were augmented by other abilities, especially woodcarving in high and low relief.

Their themes and inspiration come mostly from the influence of the priests who taught them; many of their works depict religious events. "It is a way of touching people's hearts," Germán says, although they also choose themes related to customs, culture and modern trends.

In 2002, the Montalvo brothers participated in the Inti Raymi Competition with a piece by Simeón that, they say, was considered for a prize. They also exhibited their work in the Wood Sculpture collective in the Parque 8 de Junio de Miraflores (Lima, 2002). They took first place in the Crafts and the Environment Competition (Ancash, 1999) with a work by Javier.

They work principally in cedar and mahogany wood, painted with oils. Simeón spends part of his time teaching the techniques to new students at the school. He receives no salary for this, but feels it is a way to repay the years of support and encouragement they received.

It is satisfying to the brothers that their school has always been one of the best, both in traditional courses and in art workshops. Challenged to create works that are accepted, one of their goals is to become recognized around the world.

"Every piece is an opportunity to express our profound relationship with the Catholic faith," Germán says. "It is due in no small way to the education we received as children from Salesian priests."
View all