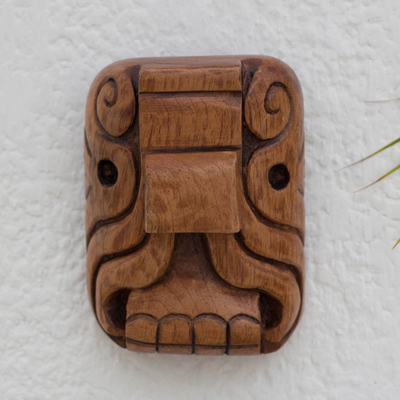 From El Salvador's Jaguar Archaeological Project, this mask evokes fierce mystical elegance. It replicates a sculpture found in the Ahuachapan Department. It is carved by hand from a cedar wood branch, for the Project is committed to preserving the environment and not cutting down trees. Painted details enhance the mask's features including a protruding nose, exposed teeth and ornate eyes.

Throughout El Salvador there have been found images depicting the jaguar with a crest, big mouth and fangs, as well as an inverted "u" shaped nostrils and swirling eyes. Known as Balam or Chac, according to Maya cosmogony the jaguar represents nature's elements: water, earth, fire, and air. Maya shamans, priests and rulers used the jaguar as a symbol of authority and leadership. The upper part of the head usually represents life elements, and the lower part connotes a skeleton. Jaguar masks are believed to represent the transformation of a human into a being with magical powers.

You can find our cedar wood mask 'Mystical Jaguar' by Jaguar Archeological Project in masks categories such as Archaeological Masks, Maya Masks, Nature Masks and Wood Masks. Enjoy exploring these sections for other Novica treasures.

Jaguar Archeological Project has received a $200 microcredit loan with 0% interest.

"All of us, archeologists and artisans, are fascinated by the research we are doing and with rescuing designs based on archival material, old photographs, scientific data, and sketches."

The Jaguar Archeological Project is an academic and cultural program with a mission to make prominent the legacy inherited to the people of western El Salvador. Founded in March of 2010, they replicate wooden masks found in pre-Hispanic constructions dating over 1500 years.

Speaking on behalf of the Project, Federico Tlaloc explains, "We are a group of archeologists with links to different academic institutions. We started researching these sculptures from pre-Hispanic El Salvador. To speak of archeology in El Salvador, one must understand our Salvadoran identity, our ideas as a nation, and our capacity to reflect about the past.

"Our ancestors left us a wonderful collection of designs, which have been rescued through archeological means and are now reproduced by talented artisans through this project. To join our project, an artisan must be sincere, be able to work in a team, and above all, have a good sense of humor. All the carvers working with us now have experience in archeological sites.

"Cornelio González, for example, is a multi talented artisan, because not only is he skilled at carving jaguar heads, he also makes sculptures from the root of the coffee bean tree, and also makes tables at his workshop. And on his spare time he gets to play the accordion with the local mariachi band.

"Juan José Rodríguez is a young artist who is honing his wood carving skills. Juan Manuel Garcia is a construction worker who is also refining his carving skills.

"We work with manual tools, from a saw to a burin. The masks are hung at the top of corrugated walls, which provides enough heat to dry the wood, so we leave them there for at least two weeks before finishing the actual piece.

"All of us, archeologists and artisans, are fascinated by the research we are doing and with rescuing designs based on archival material, old photographs, scientific data, and sketches. We began in 2005 and so far we have registered 50 samples and the proceeds from the sales of these are used to finance further research in western El Salvador.

"One of our goals is to be able to exhibit the Jaguar Head style at El Salvador's National Anthropogy Museum. We also want to put together an itinerant exhibition so people around the world get to see the art developed by the early people of El Salvador. Eventually we would like to build a museum to house the 50 jaguar head monuments we have recorded.

"The original monuments that inspire these pieces need to be protected and preserved, for many of them are out in the open and suffer from natural erosion and vandalism. With this in mind, we are using the proceeds from the sales of these items to prevent the deterioration of these monuments, as well as preventing their illegal exportation."