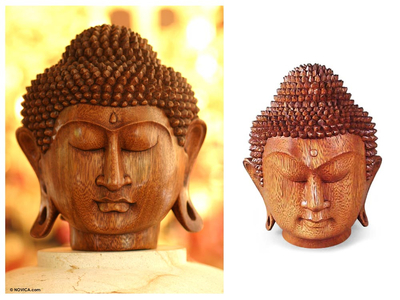 Siddhartha Gautama (The Buddha), c.563-c.483 B.C.; b. Lumbini modern-day Nepal.It is said that a fortune-teller divined that Siddhartha Gautama would become a teacher of the world. At age 29, Siddhartha left his wealthy family in pursuit of the truth. After six years, Siddhartha had the religious epiphanies on which Buddhism is based. In short, a wholesome existence guided by the right understanding, the right thinking, the right speech, the right conduct, the right livelihood, the right effort, the right mindfulness, and the right concentration releases one from the painful cycle of life and death. Today, hundreds of millions of people follow his philosophies of compassion and detachment. This sculpture of the Buddha's head is carved in Suar wood.

The carvings on this cross are striking. I like the symmetry of the carved designs. Its the perfect size for an elegant decoration.

Purchased three piece & each piece is truly a work of art. Beautiful clear finish with nice wood grain, the carving detail is wonderful. All the pieces arrive quickly & the boxes were so well packaged. Equally the package came with a totally wonder ribbon with a sweet ornament, just really super. I could not be more please with the purchase.

This is great so beautiful I recommend it to everyone I love it.

"beautiful on my wall"

this piece stands out, i get so many compliments from friends that come over. everyone love it and wants to know where i got it from.

To the Bride and Groom, Wood statuette

Beautiful face carving. Wish it were bigger, but its still an eye catcher

You can find our 'buddha Head' sculpture by Nyoman Subrata in sculpture categories such as Buddha Sculpture, Buddhism Sculpture, Religious Sculpture and Wood Sculpture. Enjoy exploring these sections for other Novica treasures.

The artistry of I Nyoman Subrata has been featured in dozens of periodicals in Asia, Europe, and the U.S., and on PBS television.