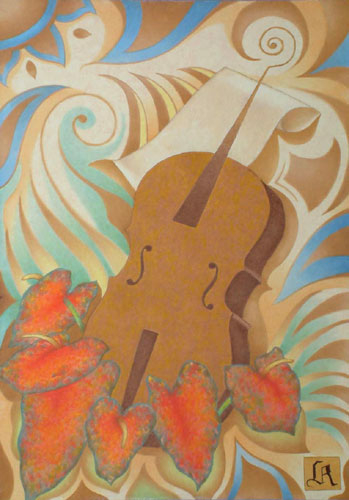 byLeonardo Ribeiro
Bright tropical anthurium blossoms gather at the base of a violin. Gentle... more

Bright tropical anthurium blossoms gather at the base of a violin. Gentle breezes caress the polished instrument and reach lightly toward the sun. Leonardo Ribeiro creates a visual symphony that lulls the soul and senses.

You can find our 'tropical Symphony' by Leonardo Ribeiro in paintings categories such as Dance and Music Paintings, Modern and Freestyle Paintings and Acrylic Paintings. Enjoy exploring these sections for other Novica treasures.

"I began painting at the height of the street art movement, towards the end of the 1960s. This was the moment in which the Art Market of Ipanema emerged, with art works and handicrafts being sold right there in public plazas. In that epoch I began to study at the school of fine arts, and worked night and day in a studio with four other artists.

"For many years I worked with galleries with classic styles. From 1996 up until the present day I've developed a freer style, oneiric and unrealistic. Some of the artists who have most influenced me include Dijon Camara and Reynaldo Fonseca.

"Today, with the trajectories contemporary art has taken, painting has lost space in art exhibitions, but not in terms of people's preferences. The Internet is a good way of making the work of world artists more accessible. Novica is an optimal opportunity and I am very happy to be exhibiting my work here."

Leonardo Ribeiro has participated in numerous exhibitions in Brazil.