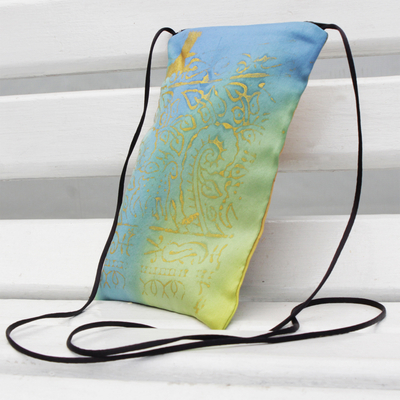 Artisan Maria Svartman of Brazil hand crafts a perfect bag for a fast-paced day -- lightweight and just the right size to keep essentials handy and easy to find. The exterior of the sling is of silk that makes an ombre transition from blue to green to yellow, with flowers and vines painted on both sides in gold paint. The pink fabric-lined interior compartment closes with a zipper. A long black cord is the shoulder strap.

You can find our silk sling bag 'Day Tripper' by Marcia Svartman in handbags categories such as Silk Handbags, Shoulder Bags Handbags and Slings Handbags. Enjoy exploring these sections for other Novica treasures.

"I have always been enamored by the lights and colors of Brazil, and I look for alternate materials that are not hazardous to nature."

"I am a Brazilian artist working in the beautiful city of Rio de Janeiro. I have long enjoyed playing with coloring pencils, as my mother would say. When I was five years old, Augusto Rodrigues opened a little art school. Rodrigues is renowned for his vanguard ideas concerning art and education. I was one of the first students in his open-air classes, which he taught on Saturday mornings. These moments are part of my most cherished memories, for they are directly linked to my fascination with art.

"Mothers, always mothers. Mine was an art enthusiast and she worked in the theater. She'd find out where she could take her daughter for ballet lessons, music, as well as where to discover the magic of paints and colors.

"When I'd arrive at the little art school, I would spend a lot of time sorting out the colors in different tubs. I used to create many colors by experimenting with the primary ones. Only then, would I finally sit down and begin to paint, and everything I did was colorful, vibrant, and different.

"When I was 10 years old I painted a composition entitled 'The Rain,' which won at the International Children's Painting Competition. It was then featured in a magazine.

"My childhood was always filled with fantasy. The little school operated from the Castro Alves Library, so every Saturday I'd take home books to read during the week. Sometimes the class would be taught outside in the fresh air, so we could paint about trees and nature. I learnt that art had no limits, and that I could paint about nature, about words, and about images.

"I was still going to the little school during my adolescence when I learnt engraving techniques from Darel Valenca, Adir Botelho and Inesquecivel Goeldi. When I was 15, I won another award at a Children's Art Competition for a wood engraving I had made. This award led a scholarship to study at the Museum of Modern Art, which had recently opened. My teachers included Rossini Perez, Edith Behring and Ana Letizia. I then began to study metal engraving.

"I studied architecture while I was refining my metal engraving techniques and when I was 23 years old I went to study Graphic Arts at the Memphis Academy of Arts. I participated in several outdoor exhibitions.

"I lived in different places for seven years, including Memphis, Chicago, and Trinidad and Tobago.

"I returned to Brazil after seven years, and I participated in the first exhibition of 'The Face – The Work,' which led to my inclusion in Brazil's Dictionary of Fine Arts.

"I worked for the State's Department of Education as an architect for school buildings, and as a consultant for Bird and US Aid, which allowed me to travel throughout Brazil and visit many villages. They often inspired the themes of my paintings.

"Later I became a stylist and I made little models for the television, cinema, and theater.

"I began painting on silk when I was 10 years old. I am a member of a group of 10 Brazilian artists who work on silk as the basis of art. We exhibit our work together throughout Brazil. The idea of making garments and accessories came as a result of my desire to make art that could be useful and practical. I have always been enamored by the lights and colors of Brazil, and I look for alternate materials that are not hazardous to nature.

"It is important to me to be associated with Novica because it is a collective work that brings together artists from the whole wide world. Novica also allows my work to be recognized on the internet, thus reaching every corner of the world. It is a wonderful idea, so I am proud to be included in the Novica family."