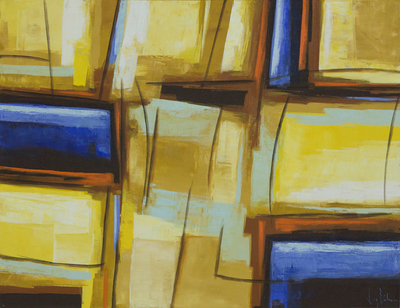 In yellow and blue, this painting represents Luiz Badia's search for geometric variations on one theme. "I wanted to express through colors and shapes the balance between the energies and emotions that I feel toward the infinite universe. I used geometric shapes and intentional drippings of color to symbolize the opposition between the rational and the emotional," confides the Brazilian artist.

"Inspired by burlesque engravings of the 19th Century, by marionettes and by circus figures, I began to develop a more personal style."

"When people are young they think that earning a living from art is a heroic mission. It's like saying, 'I'm going to the Himalayas!' A daring move. I believe that I couldn't do anything in life if it weren't related to art; I think I would be a total disaster. After a while, it is possible to construct a work and to live normally, just like any other profession.

"I began to work professionally with the Portuguese painter Mello Marques. At 14 years of age I had already sold in markets and been part of exhibitions. Under the guidance of my teacher, I went to study at the school of Fine Arts in Lisbon, Portugal, where I lived for five years. I met many artists, dancers, painters, writers, and musicians. It was then that I opened my own heart to the possibilities of art.

"Inspired by burlesque engravings from the 19th Century, by marionettes, and by circus figures, I began to develop a more personal style. They are exotic characters that suffer from a kind of deformation, because the images that we save in our memories aren't always true to what we really live. When we are drawing an object that is right in front of our eyes, we are able to reproduce it with realism. But if we observe it and only later try to represent it, it will be, without a shadow of doubt, a personal interpretation of the object. Our mind is capable of modifying anything. There are some artists I use as references: Munsch, James Ansor, Vemeer, and Aleijadinho, a Baroque Brazilian sculpture that often worked with deformed figures. All of this is mixed randomly in my subconscious and later influences my work. Oftentimes it takes me a year to conclude the idea of a painting, as they are very complex compositions.

"I am a teacher and president of the Association of Visual and Artistic Events in Rio de Janeiro. I really like to give workshops because I am a curious person and the doubts that my students present to me stimulate my mind. I advise my students to always surround themselves with good things, good music, good films, good painting, and good feelings. Without a doubt, this greatly influences the final result of the work. Participating in the association is very important in order to solve some of the most serious problems faced in Brazilian culture: the lack of space and incentive. Promoting interpersonal contacts with common interests is very enriching and helps to provide each artist's work with continuity."

Luiz Badia is a highly respected artist both within Brazil and abroad. His work has been exhibited in Brazil, Portugal, and the United States.
View all