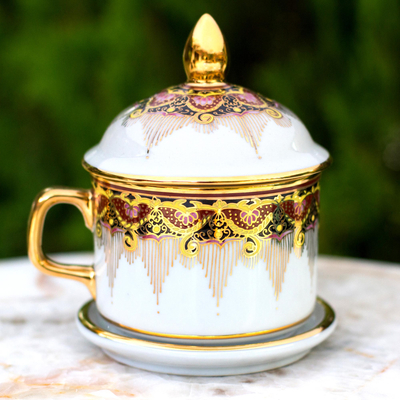 Pink and red lotuses detailed with 2.6k gold applications celebrate the legendary art of Benjarong. This white porcelain teacup is designed by Panida Tamjun. She is inspired by the classic batik motifs of southern Thailand. The teacup, lid and saucer, are all painted by hand with detailed artistry.

I bought two of these as gifts and they are appreciated!

I bought four of these teacups and they are all gorgeous! The workmanship is remarkable.

"A joy to behold"

This beautiful box was more beautiful than expected. My only concern was there was no artists signature and date. I would like to give this to my granddaughter but without a mark of identification it would be difficult to price for insurance. The artist should have her name or mark on her pieces. I look forward to other boxes..

I ordered this item as a Christmas gift for my aunt who travels a lot and already has everything -- she absolutely loved it! It is exactly as pictured, with the gorgeous vibrant colors and intricate designs proving the exceptional quality of the craftsmanship. Very elegant and truly a work of art -- plus very functional with the lid to keep beverages warm :). Highly recommend!

From Great Plains of the United States of America

"Elegance of the Elephant"

Love the delicate design and the applied goldwork. Once I saw this elegant mug, I knew it was meant for my daughter! I am sure that she will be pleased with the quality of craftmanship and enjoy the uniqueness of this beautiful piece.

You can find our benjarong porcelain teacup 'Thai Iyara' by Panida Tamjun in tableware categories such as East meets West Dinnerware, Benjarong Dinnerware, Porcelain Dinnerware and Mugs and Cups Dinnerware. Enjoy exploring these sections for other Novica treasures.

"There's no exact date when Benjarong crafts began. The Benjarong we create is a glazed pottery painted with five enamel colors, which include black, white, yellow, red and green."

"I'm Panida Tamjun from Southern Thailand. I was a professor at a technical college in Bangkok. My husband is an engineer and worked in a factory.

"Benjarong-style porcelain is beautiful. In ancient times, Benjarong was created only for the royal court and aristocracy. One day, my husband and I went to visit a friend in an artisan village where traditional Thai Benjarong porcelain is made. During that trip, I learned about the process of crafting Benjarong porcelain. I was very excited when I began painting patterns and became passionate about this craft. Since then, my husband and I have been interested in Benjarong.

"My husband and I spent every holiday learning and practicing for three years until we became experts. We were confident we could earn enough for our family and live a happy life by making and selling Benjarong porcelain. In 2004, we decided to quit our jobs and set up a workshop to produce Benjarong. We also organized a small group of people from our community. The members spend their time after work to be trained on how to draw Benjarong patterns to earn extra income.

"The main feature of my craft is the pattern. I utilize the batik patterns common in Southern Thailand fabric in my Benjarong, which makes my creations colorful and represents the regional artistic identity through its pattern. Besides general porcelain items, we also create a trophy cup.

"Currently, our group has opened a learning center for people interested in this craft, including tourists, so that we can maintain and preserve this unique Thai art form.

"There's no exact date when Benjarong crafts began. The Benjarong we create is a glazed pottery painted with five enamel colors, which include black, white, yellow, red and green. We also use pink, purple, brown and orange. Our popular patterns include traditional Thai motifs, lotus, Chinese cabbage, flowers and mythical animals. The artisan creating the Benjarong has to be very skillful and careful.

"Some evidence from an archaeological piece found in Ayutthaya, the former capital of Thailand, depicts a pattern and color similar to Chinese wares and it is believed to have been made and ordered from China since that ancient era. Thai people could also order plain white porcelain to paint their own patterns and then send the piece back to China to be fired to complete the process. If it was for the royal court, it needed to be diligently created and the artisan would closely control the firing process.

"To create Benjarong, we start by drawing motifs on white porcelain. We then paint within the lines and fire the pieces in a kiln. I currently create a wide range of items designed for daily use. It is an opportunity to present my crafts around the world and to earn income for our group members. I hope you will support us. Thank you very much."
View all