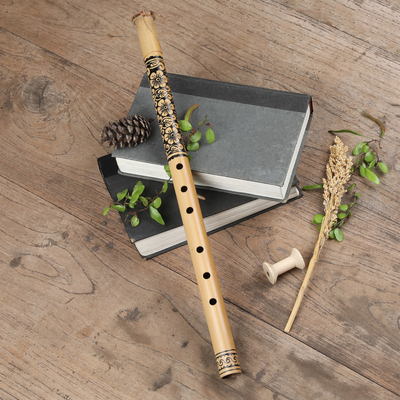 (2)
Crafted by hand, this beautiful bamboo flute comes from Made Sudiasa. A... more

Crafted by hand, this beautiful bamboo flute comes from Made Sudiasa. A latticework of jasmine surrounds the sleek instrument, each blossom painted by hand. A coconut shell mouthpiece distinguishes the flute. "Its sound is one of beauty that blows with the wind to faraway lands," the musician confides.

My husband loves it!

Beautiful packaging and beautiful work all around. Balinese flutes make the most beautiful music and I know my partner will love this. Thank you, Made!

"The special thing about my bamboo flutes is that I make the blowhole with coconut shell, making the sound more stable. A real bamboo flute player can usually tell the difference."

Made Sudiasa learned to play the flute when he was 20 years old. He enjoyed it so much he decided to make his own and fortunately his neighbor was an expert flute-maker who taught him well.

"The first bamboo flute I ever made was not good at all, there was no sound! I soon realized the mouthpiece was in the wrong position so after several trials and errors I finally fixed it and the flute made a beautiful sound.

"I played this bamboo flute in my banjar (village community center) and many people liked it. Flautists from another gamelan orchestra heard about my flute and its sound, and wanted to know where they could buy one too! That's when I decided to craft more bamboo flutes to sell and now I receive orders by many more people from other gamelan groups.

"In 1984 I got married in Jasri Karangasem, and now we have a couple of daughters and a son. My wife and children help me out by sanding the bamboo in their free time.

"The first bamboo flutes I made where plain, but now I work together with a neighbor who paints them by hand. Now my bamboo flutes are not plain anymore.

"The special thing about my bamboo flutes is that I make the blowhole with coconut shell, making the sound more stable. This is because differences in the weather temperature can affect the sound. A real bamboo flute player can usually tell the difference."
View all